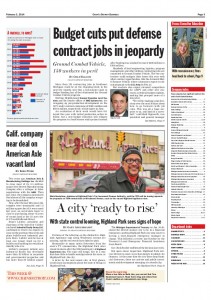 Portions of the lettering on the distinctive Highland Appliance sign along Woodward Avenue are missing, and the red words have faded to pink.

Memorable to many metro Detroiters from the store’s TV commercials, the Highland Park store closed its doors after the 1993 bankruptcy of Highland Superstores Inc. The sign still hangs, but in a way that does little to kindle nostalgia about the store, or Highland Park, the city.

A drive by the now-vacant site, at first glance, could cause assumptions about the state of things in Highland Park.

The Michigan Department of Treasury on Jan. 24 declared the Detroit enclave city to be in a financial emergency, putting Highland Park one step closer to having a state-imposed emergency manager in charge. This followed a review last October by the Treasury’s Local Emergency Financial Assistance Loan Board.

But upon closer inspection, Highland Park mirrors Detroit in more ways than deeply troubled city finances. At the same time the city faces deep financial distresses, there are private and public investments and development emerging at a steady clip.

Those plans even include new life for the Highland Appliance site.

Mark Hackshaw, president of the Highland Park Business Association and chairman of the city’s Tax Increment Finance Authority, said real estate sites like the vacant store on Woodward Avenue have built-in value, namely, their location off a major regional artery.

The authority purchased the Highland Appliance property last fall, and the TIFA also now owns the old city hall, fire station and other properties on or near Woodward and is preparing request for proposals for them. The idea is to attract businesses such as restaurants, bars and entertainment venues.

The city has plenty of retail; it now needs these kinds of quality-of-life businesses, Hackshaw said.

“You’re not going to be able to go downtown without stopping somewhere in Highland Park,” he said.

Conversations with other people in the local business community reveal optimism like Hackshaw’s — more than might be expected from a city that just emerged from financial management in 2009, a status it had since 2001.

No one glosses over Highland Park’s problems. But they say there’s more going on than people realize.

“You never like to hear that your city is going to be under control of a financial manager. But … with all the negative that’s been in Highland Park for so many years with arson and fires and businesses leaving, I gotta tell you I’m optimistic,” said Nick Becharas, president of Becharas Brothers Coffee Co., a coffee roaster that’s been in business for 100 years and in Highland Park since 1961.

“There’s business here,” he said. “It might not be as evident as what Dan Gilbert is doing downtown because there’s no real destination point here in Highland Park. But there’s business in the city.”

Companies, some of them on land vacated by Chrysler when it began its move to Auburn Hills in 1992, have hired hundreds of people in recent years. That might not make a big difference in Detroit. But in a city of fewer than 12,000 people, it can.

Magna Seating of North America opened a plant in Highland Park in 2010 that now supplies seating to all three Detroit automakers and employs 600 people. It also has completed a $2.2 million expansion of the plant begun in 2012.

And Birmingham-based Glencoe Capital Michigan LLC, which owns Budco and Novo 1, merged those two companies and Troy-based Dialogue Marketing Inc. into a new company called DialogDirect Inc., based at the Highland Park location.

The location now has about 700 employees in total, said Jack Wilkie, chief marketing officer of DialogDirect.

Integrated Manufacturing and Assembly LLC, a joint venture of Lear Corp., closed its Brownstown operation last year and moved employees to Highland Park, increasing the employee count to 200 from 130.

The city’s automotive roots are proving valuable today, both for providing a ready workforce and for revving up plans for auto-related tourism.

Highland Park’s unemployment rate has dropped to 20 percent now from 35 percent in 2009.

Movement also is happening in a Model T-era Ford Motor Co. building on Woodward that’s been empty since the mid-1970s. The former administrative building near the Model T plant is in the final stages of a $550,000 purchase by the Woodward Avenue Action Association, using money that includes a $400,000 preservation grant from the Michigan Department of Transportation and $100,000 from the city’s TIFA.

The nonprofit envisions an automotive welcome center where tourists would get information on automotive industry destinations, much as a national park visitor would go to a counter to pick up maps, said Executive Director Deborah Schutt. The building also would have a theater and displays.

The association plans to launch a $7.5 million capital campaign in April, said Schutt, who’s been working on this project for a decade.

Hackshaw said the coming M-1 Rail line project, which will run through Highland Park, and the city’s relative proximity to other hot spots are other selling points.

The Highland Appliance site, and redevelopment efforts for it, is expected to provide a significant psychological boost for the stretch of Woodward, north of the Davison, which still has its share of shuttered and burned-out storefronts.

The Shops at Woodward Place, a retail development opened in 2008 on a former Sears site, has been fully occupied for more than a year, said Curis, whose company manages the center.

Theresa Johnson, who opened a Tim Hortons franchise in The Shops at Woodward Place in July 2012, said business has grown steadily in the double digits, showing Highland Park can sustain more than dollar stores and fast-food restaurants, she said.

“Just because we came into the city doesn’t mean we have to have a Dollar Menu,” Johnson said.

With daily one-way traffic moving through at a clip of 31,000 vehicles a day, according to the city’s economic development office, Highland Park’s stretch of Woodward has the same potential as Midtown, said Lauren Hood, who served last year as community and economic development project manager.

The city last year opened a new fire station after years of firefighters working out of a warehouse. It doesn’t take long for residents to mention this sign of progress in a place where streetlights and water service are no longer taken for granted.

In 2011, DTE Energy Co. removed 1,300 streetlights in a settlement with Highland Park over $4 million in unpaid energy bills.

In 2012, the city shut down its water department because maintenance costs had grown too high. Paying Detroit’s water authority hasn’t helped much, though. The water and sewer fund went from $5.5 million to $12.5 million in the red from fiscal 2012 to 2013, a leading factor in the state’s decision to slap the financial emergency label on the city this month.

The city’s annual general fund revenue is about $11 million. Its long-term debt is nearly $58 million.

Highland Park’s problems are by no means solved by a handful of real estate developments, observers agree. Like Detroit, it faces declining population and high unemployment. And it still has plenty of unused real estate: an estimated 2,500 properties remain off the tax rolls, by Hackshaw’s measure.

Other developments serve as reminders that while it’s tough to get past a phase of hard decline, it pays to be patient.

Automotive repair manual producer Helm Inc. moved to Plymouth from Highland Park in 2011 after 35 years, taking about 100 jobs with it, according to the Michigan Works office. And Chrome Craft closed in 2009 for a loss of 64 jobs.

However, Plymouth-based Recycling Depot LLC began setting up operations in the Helm space last year and should have 200 employees there within two years, said Louis Starks, director of community and economic development.

Said Becharas: “Obviously things have changed. But the city has got a lot of grit. We’re centrally located, we’ve been here forever and we’re not going anywhere.”