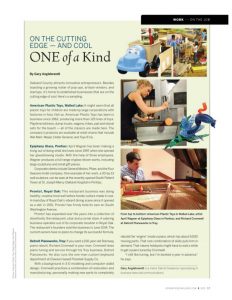 Budding entrepreneurs are all the rage these days. It’s hard to go a week without hearing about new pop-up shops, food trucks and artisan vendors, all highlighting the satisfaction that comes from “doing what you love.”

But these new businesses aren’t the only ones built on fun and passion. Here are four that have been around for some time, demonstrating that cool businesses have staying power too.

American Plastic Toys, Walled Lake: One might think that by now all plastic toys for children are made by large corporations with factories in Asia. Not so. American Plastic Toys has been making toys since 1962 and continues to do so, producing over 125 lines of toys. Playtime kitchens, dump trucks, wagons, trikes, pail and shovel sets for the beach — all the classics are made here. The American-made toys are available at retail chains such as Wal-Mart, Meijer, Dollar General and Toys “R” Us.

Epiphany Glass, Pontiac: April Wagner has been making a living out of doing what she loves since 1997 when she opened her glassblowing studio. Wagner, with the help of three employees, makes a full range of glass-blown works, from large sculptures to small gift pieces, for corporate, hospitality and private clients.

An artisan hobbyist Wagner is not. Sustained success as a creative endeavor has allowed her to build a studio more likely to be seen at a school or larger business. “We have a sophisticated setup here that is unusual in a private situation,” Wagner said.

Corporate clients include General Motors, Pfizer and the Four Seasons hotel company. One example of her work, a 20×13 wall sculpture can be seen at a recently opened South Patient Tower at St. Joseph Mercy Oakland hospital in Pontiac.

Pronto!, Royal Oak: This restaurant business was doing healthy, creative food well before “foodie” culture made it cool. A mainstay of Royal Oak’s vibrant dining scene since it opened as a deli in 1991, Pronto has seen its share of restaurants come and go while firmly holding its familiar spot on S. Washington. Pronto’s deli roots are still reflected in its menu, which has a large variety of sandwiches. The business also is known for its bakery and desserts.

Pronto has expanded over the years into a collection of storefronts: the restaurant, a bar and a corner store. It also runs a catering business from its corporate location in Royal Oak. A large patio in back with an abundance of flowers is popular during warm months.

The restaurant’s founders sold the business in June, putting more than 20 years of work into keeping Pronto fresh. The new owners have no plans to change the proven, successful formula that is Pronto.