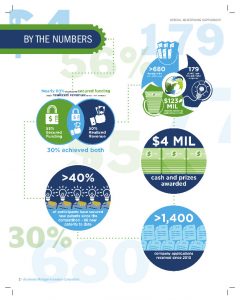 Amid all the numbers illustrating the impact the Accelerate Michigan Innovation Competition has had in its first four years, it’s easy to forget the actual products supported through the event.

These are products with the potential to impact industries and lives. The companies’ offerings are based on technologies that require patience, and therefore investment dollars, to develop.

The event draws national and international investor attention to these innovate, technology-driven products.

“It definitely brings lot of people into Michigan and exposes them to the kinds of things going on here,” said Jennifer Baird, CEO of Accio Energy Inc., which won a $25,000 alternative energy sector prize in 2010.

The businesses that show up at Accelerate Michigan represent a wide spectrum of sources and applications, said Lizabeth Ardisana, CEO of ASG Renaissance in Dearborn and a judge in the competition for the past three years.

“Despite the fact that I think I’m an entrepreneur, the ideas I was exposed to at the competition I never would have thought of. Some were mind-bogglingly interesting,” Ardisana said.

Take for example the winner of the first year’s first place award of $500,000, Armune BioScience Inc. in Kalamazoo. Armune’s product, which the company says is on the verge of commercialization, would cut thousands of dollars in health care costs for prostate cancer detection.

Eli Thomssen, CEO of Armune, said the award brought his company money and investor attention. But it also brought something even more forward-looking: potential beneficiaries of his company’s technology to diagnose prostate cancer. Calls came in from people wanting to know more about the technology because they or someone they knew had prostate cancer.

“Even the general public had heard about it and had interest,” Thomssen said.

Here’s how the technologies of other past-year winners promise to impact the world:

Whitney Rockley, co-founder and managing partner of Toronto-based McRock Capital and a three-time Accelerate Michigan judge, invests throughout North America. She’s been impressed with the hungry determination she’s seen from Michigan entrepreneurs. “A lot of them are trying to figure out a way to persevere against diversity. I see a lot of very creative, innovative ideas, and I find it to be a very creative-pitching kind of competition,” she said.

Investors have noticed, too, with multiple firms offering competitive term sheets for the same Michigan companies, “which I think is wonderful for the ecosystem,” Rockley said.

Those who’ve been involved with the event, whether as funders, judges or competing companies, say one of its great benefits is that it provides a meeting place for the state’s entrepreneurs and investors to gather and compare notes.

“The ecosystem in Michigan is fairly robust and well-connected,” said J. Kevin McCurren, executive director of The Richard M. and Helen DeVos Center for Entrepreneurship & Innovation at Grand Valley State University, which has sent student teams to compete at Accelerate Michigan. “Accelerate Michigan gives people a chance to come together and compete and see the good stuff that’s coming out. From a student perspective, it creates energy and camaraderie around startups. It’s creating a culture of competiveness.”

McCurren has been a judge on the student side and has seen student teams that do not win at Accelerate Michigan go on to get funding through other angel investor groups, such as Start Garden in Grand Rapids.

Skip Simms, senior vice president at Ann Arbor Spark, said entrepreneurs also get the intangible benefits of learning how to craft a business plan and present it in a polished public speech and presentation. “Then of course there’s the event itself. What a great networking opportunity it is for them, not just for meeting people with capital but meeting other entrepreneurs,” Simms said.