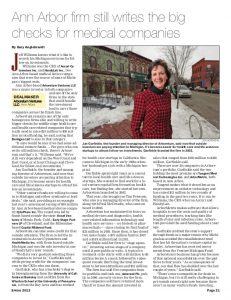 Jeff Williams knows what it’s like to search his Michigan environs for follow-on investments.

Williams was the CEO of Accuri Cytometers Inc. and HandyLab Inc., two Ann Arbor-based medical device companies that were the source of some of Michigan’s biggest exits.

Ann Arbor-based Arboretum Ventures LLC was a major investor in both companies and one of the only firms in the state that could handle the investment load to carry those companies across the finish line.

Arboretum remains one of the only homegrown firms able and willing to write bigger checks for middle-stage health care and health care-related companies that typically need to raise $25 million to $50 million in total funding, he said, noting that Beringea LLC is also in that category.

“It sure would be nice if we had some additional venture funds. … For guys who can write a $5 million check, there’s Arboretum and that’s it,” Williams said. “We’re still very dependent on the West Coast and East Coast, or at least Chicago and Cleveland, for follow-on (investments).”

Jan Garfinkle, the founder and managing director of Arboretum, said now that outside investors are paying attention to Michigan, it’s become easier for health care and life sciences startups to attract follow-on investments.

“Other venture funds are willing to come in to Michigan and either syndicate or lead deals,” she said, providing as an example last year’s announced raising of $36 million by Ann Arbor-based medical device company CytoPherx Inc. The round was led by funds based outside the state: Onset Ventures of Menlo Park, Calif.; Early Stage Partners LP of Cleveland; and the Milwaukee-based Capital Midwest Fund.

Arboretum can take some credit for that outside attention. The firm co-led the investments in Accuri Cytometers and HealthMedia Inc. with firms based outside Michigan and was the sole investor in one of HandyLab’s later rounds.

“We did a very good job selecting those companies to invest in,” Garfinkle said, while giving credit for the companies’ success to the CEOs who ran them.

Garfinkle, who has a bachelor’s degree in bioengineering from the University of California at Berkeley and an MBA from the Wharton School at the University of Pennsylvania, is from the Bay Area and has worked for health care startups in California. She came to Michigan in the early 1990s when her husband got a job with a Michigan hospital.

Garfinkle spent eight years as a consultant to local health care and life sciences startups. She wanted to find work for a local venture capital firm focused on health care, but finding few, she started her own. Arboretum launched in 2002.

That year, she brought on Tim Petersen, who also is a managing director of the firm, along with Paul McCreadie, who came on board in 2006.

Arboretum has maintained its focus on medical devices and diagnostics, health care-related information technology and health care services — no biotech or pharmaceuticals — since closing its first fund of $24 million in 2003. Since then, it has closed two more funds: a $75 million fund in 2007 and a $149 million fund in 2011.

Garfinkle said her firm is “stage agnostic,” investing across stages of a company until it goes public or exits. A typical investment cycle starts with a $3 million to $5 million Series A round, followed by subsequent rounds that bring the total investment to between $8 million and $12 million.

The firm has sold five companies from its portfolio and took one, Asterand Plc, public in 2006, an early victory for the firm. The companies sold have returned more than five times the amount invested in sales that ranged from $180 million to $285 million, Garfinkle said.

There are now 20 companies in Arboretum’s portfolio. Garfinkle said the two holding the most promise are Tangent Medical Technologies Inc. and ArborMetrix, both based in Ann Arbor.

Tangent makes what it describes as an improvement on catheter technology and has raised $13 million in two rounds of funding in the past two years. It is run by Williams, the CEO who ran Accuri and HandyLab.

ArborMetrix makes software that allows hospitals to see the costs and quality of medical procedures, tracking data like length of stay and infection rates. Arboretum provided the seed funding about a year ago.

Garfinkle credited the state’s support through funds as a major reason why Michigan has avoided the consolidation trend that has hit the nation’s venture capital industry. Arboretum has received investments from the Venture Michigan Fund.

Arboretum’s business has grown because of that national consolidation over the past three to four years. “As a consequence of that, our deal flow has doubled over the last couple of years,” Garfinkle said.

“There’s more competition for deals in Michigan, but it’s still really challenging to get rounds raised right now because there aren’t as many venture funds investing.”