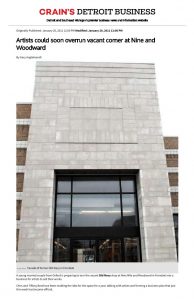 A young married couple from Oxford is preparing to turn the vacant Old Navy shop at Nine Mile and Woodward in Ferndale into a business for artists to sell their works. Chris and Tiffany Best have been molding the idea for the space for a year, talking with artists and forming a business plan that just this week has become official.

The Rust Belt Market would allow artists to rent spaces and sell their works during weekends. It is on track to open in March or April.

The enterprise was initially named NOCO, for Nothing Corporate, but was changed after artists said the name might turn people off or limit the scope of the business.

The Bests are putting out the message that The Rust Belt Market is not to be another co-op or flea market. They want it to be a place for artists to make money and where new Michigan-based businesses can start or add to sales.

First-month discounts would be offered. Food and vintage clothing vendors are also welcome.Vendors can also share space or rent multiple spaces. They will also be encouraged to be creative in their setup displays.

Artists will be able to use the space during the week as storage or studio space at no extra charge, the Bests said.

“We’re going to let artists dictate what’s best for them,” Chris said. “We’re trying to (help) them to make money.”

There are similar outlets in the Detroit area for artists to sell works, but they are usually one-off events, consignment shops and, of course, galleries. The People’s Arts Festival at the Russell Industrial Center is one key event. The show is an outlet for people who might not be big enough for galleries but who also don’t want to be associated with flea markets, which aren’t exclusive to art, or craft shows for homemade doilies and lighthouse paintings. The show has drawn increasing attention in its four years, and the Bests see an opportunity for something more to happen.

“We went to the People’s Art Festival, saw the level of talent and couldn’t believe this hasn’t been tapped into,” he said.

Etsy.com is another popular outlet for what is sometimes known as “outsider art.” The Bests see their business as an added avenue for such artists.

“It’s going to put pressure to not just sit at home and rely on Etsy,” Tiffany Best said.

Jason Driscoll, a local artist who goes by the name of Kill Taupe, sells his work at the People’s Arts Festival and Etsy. He said he welcomes The Rust Belt Market.

“I really hope it can draw,” he said. “Ferndale and Royal Oak is the right place to do it.”

Ferndale has many independent shops, and the Bests said they have heard some concern from locals that “another Walgreen’s” would end up going into the space.

Old Navy closed about two years ago as its parent, Gap Inc., downsized and eliminated outlets, said Cristina Sheppard-Decius, executive director of the Ferndale Downtown Development Authority. There has also been a trend of more national retailers moving into smaller spaces than in the past, she said. The DDA encouraged the property owner, Grenadier Properties LLC, based in Bingham Farms, to slice up the 15,000-square-foot space into smaller portions.

The Rust Belt Market would take up about one-third. Other people interested in the rest of the space have been talking to the property owner, including people involved in film-related businesses, Sheppard-Decius said.

The Bests considered other areas, but this location was hard to beat: A busy downtown corner of Ferndale, a town located in the geographic heart of metro Detroit and one that harbors a creative community.

“This is where the community is. It’s such a cornerstone of Ferndale,” Tiffany Best said.

The Bests will benefit from Tiffany’s brother’s licensed building business, Glasstek LLC in Metamora, when it comes to construction work. Glasstek is a welding and architectural builder specializing in high-end glasswork.

They have also reached out to Handmade Detroit, organizer of the Detroit Urban Craft Fair, for advice, as well as Michigan Indie Crafters of Etsy (MICE) to gauge interest.

One benefit for artists, the Bests said, would come from the marketing that Rust Belt Market would do. The Bests have planned a startup budget of $35,000, including between $15,000 and $20,000 for marketing in Real Detroit and other outlets. They plan to use social media, as well.

Ultimately, they hope The Rust Belt Market will be a destination for travelers from outside Southeast Michigan.

Sheppard-Decius said the Ferndale DDA had been considering creating some sort of market for local producers of goods and foods, but the idea was put on the back burner.

“The DDA was looking at creating an entrepreneur incubator and also a market that would kind of go along with it,” she said. “Even though it was a great idea, it wasn’t of the utmost importance to do right then.”A few months later, along came the Bests.

“We’re very much about creative entrepreneurship and very much want to support that and also support existing entrepreneurs,” Sheppard-Decius said, pointing to Ferndale-based businesses B. Nectar Meadery and Garden Fresh Salsa as examples of local goods-makers that might be able to sell at Rust Belt.

The Bests are going full-steam ahead to get their business open. Tiffany works at a salon around the corner in Ferndale and will leave her job to handle operations at Rust Belt. Chris works for Tiffany’s brother at Glasstek and might have to take a leave of absence.

This week, they met with a lawyer who is finalizing the business name and an accountant who drew up the official business plan.

The website is set to be up within one week at therustbeltmarket.com. The site will include an application for artists interested in obtaining space.