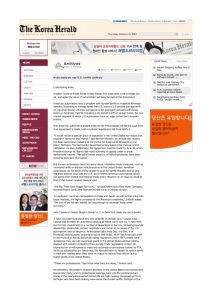 Another round of South Korea-United States free trade talks is set to begin Jan. 15, and again the issue of automobiles will likely be part of the discussions.

American automakers have a problem with Korean tariffs on imported American vehicles. According to Yonhap News, the U.S. levies a 2.5 percent average tariff on imported Korean vehicles, compared to the average 8 percent tariff Korea levies on American imports, including a 25 percent tariff on pickup trucks, the one market segment in which U.S automakers have an edge in their own domestic market.

One American automotive analyst believes the FTA probably will fail because even if an agreement is made, both countries’ legislatures still must ratify it.

“It would not be a popular piece of legislation in the United States nor would it be popular in Korea for that matter,” said Bernard Swiecki, an analyst who studies the Asian automotive industry at the Center for Automotive Research in Ann Arbor, Michigan.

The Democrats’ November victory lessens the chances of FTA ratification, he said. Additionally, the agreement must be made by June 30, when President George W. Bush’s fast-track authority to quickly usher in trade agreements expires. That puts further pressure on talks that already have been noted for their lack of progress.

But Korean automakers need not worry about retaliatory trade measures, such as increased tariffs on Korean vehicle exports to the United States. American automakers do not seem willing or able to push for tariffs. Besides having long lost their political clout with the U.S. government, American automakers would not spend their limited international trade policy influence on an issue as small as that of the Korean market, Swiecki said.

“In particular, currency manipulation in China and Japan, as well further entry into those markets, are higher priorities for the American companies,” Swiecki added.

“The size of the Korean market isn’t big enough to outweigh these other
concerns.”

“I have not heard talk about any kind of tariffs on Korean cars,” Casesa said.
Casesa was formerly an automotive analyst at Merrill Lynch and Co. in New York.

His firm has investments in a number of dealerships in the U.S., including Hyundai dealerships. Meanwhile, Korean negotiators are certain to be aware of the U.S. automakers’ lack of influence. At the latest talks, held Dec. 4 to Dec. 8 in Montana, sticking points centered on autos and drugs, which the Americans want to sell more of in Korea, and antidumping regulations, which the Koreans want dropped so they can sell low-priced goods in the United States without getting slapped with industry-protecting fines. Korean trade negotiators on Dec. 26 expressed an unwillingness to make any automotive concessions toward an FTA.

“These are professionals. They know what they are doing,” Swiecki said.
Nevertheless, November’s midterm elections in the United States have placed the Democratic Party, and its protectionist leanings, back into the political picture.

Some of the newly-empowered Democrats are high-ranking Congressmen from Michigan who have been making noise about the Korean tariffs. Michigan is the home state of GM, Ford and Chrysler – companies continuing to lose market share in their home market. Korean automakers have made gains in recent years and seem to be following the same path the Japanese took before them, undercutting the competition on price while steadily increasing quality.

Rep. John Dingell, who chairs the House Energy and Commerce Committee, in
November sent an open letter on behalf of the American automotive companies to President George W. Bush. The letter specifically addressed the Korean FTA: “Since it began exporting cars, Korea has taken advantage of open markets overseas, while keeping their domestic market free of international pressure.

Korean tax and non-tax barriers to American vehicle imports must be changed in the final FTA, the letter continued.

Rep. Sander Levin, another Michigan Democrat, leads a trade subcommittee of the House Ways and Means Committee. He has criticized Bush, saying the
president has done nothing to help American automotive vehicle and parts
manufacturers compete against lower Korea prices. Sen. Carl Levin of Michigan, Sander Levin’s brother, has lodged similar complaints and is set to become chairman of the Armed Services Committee.

But the Michigan delegation doesn’t represent the country.

President Bush would seem to agree. No promises or policies were announced after a meeting with Detroit auto executives in November. The meeting was held to give executives a chance to air a list of problems and was beforehand publicized loudly among the Detroit media, making the ensuing silence from Bush all the more noticeable. And no one in Detroit has forgotten when Bush last January said, while talk of a GM bailout was in the air, that U.S. auto manufacturers need to make, “a product that’s relevant.”

“There’s a perception that this administration won’t do anything to protect U.S. auto manufacturers,” Casesa said.

Although Korean negotiators would likely back off if they thought the U.S. would strike at their auto exports “Korea has a lot more to lose,” he said, “American manufacturers’ expectations of an open Korean auto market aren’t high.

“There’s a perception that the Korean market is closed to all foreigners,” he said.

“It’s been quite a long time since people in the industry felt they could do much about it.”