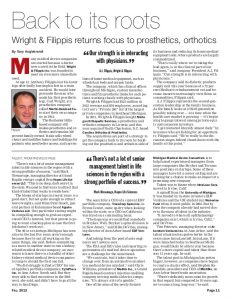 Many medical device companies are started because a doctor sees a need in the field. Wright & Filippis Inc. was founded to meet an even more immediate need.

At age 13, Anthony Filippis lost his lower legs after badly hurting his feet in a train accident. He would later persuade the man who made his first prosthetic legs, Carl Wright, at a prosthetics company called Martin-Halstead Co., to start their own company in 1944.

The Rochester Hills-based company still makes prosthetics and orthotics and remains 100 percent family-owned. It also sells wheelchairs and modifies homes and buildings for patients who need better access, and carries lines of home medical equipment, such as wheelchair beds and oxygen tanks.

The company, which has clinical offices throughout Michigan, custom manufactures and fits prosthetic limbs for each patient, working closely with physicians.

Wright & Filippis had $123 million in 2012 revenue and 850 employees, according to Crain’s “Private 200” list of the largest private companies in Southeast Michigan.

The acquisitions are part of a strategy to get the company back to its roots by building out the prosthetics and orthotics side of its business and reducing its home medical equipment side, where products are largely commoditized.

“That’s really where we’re taking the lead again, is in the clinical part of our business,” said company President A.J. Filippis. “Our strength is in interacting with physicians.”

The company sold its diabetic products supply unit this year because of a 72 percent Medicare reimbursement cut and because insurers increasingly view these as commodities, Filippis said.

A.J. Filippis represents the second-generation leadership at the family business. As the family looks at a third generation possibly taking over — at a time when the health care market is growing — it’s beginning to gauge interest among private equity and corporate investors.

“I get contacted literally almost daily” by investors who are fishing for an opportunity, Filippis said. “We’re really in the discussion stages behind closed doors with the family at this point.”