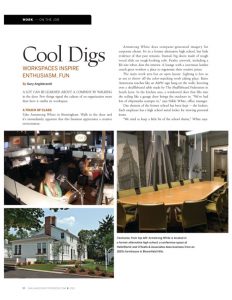 A lot be can be learned about a company by walking in the door. Few things signal a company’s culture more than it how it fits out its workspace — the trappings and colors geared toward creating a certain atmosphere.

Walking into the offices of Armstrong White in Birmingham, it’s immediately apparent that this a business that appreciates a creative environment.

The company, which does CGI work for corporate clients, is in a former alternative high school, although little evidence of that past remains. Instead, big doors made of rough wood slide on tough-looking rails. Funky artwork, like a life-size robot reminiscent of 1950s science fiction, dots the interior. A lounge room with a cavernous leather couch gives workers a place to nap and regenerate their creative juices.

The main work area has an open layout. The lighting is kept dark so as not to throw off the careful color matching work taking place. Retro Americana touches like an A&W sign and a piece of art made from a metal Firestone sign hang on the walls, hovering over a shuffleboard table made by The Shuffleboard Federation in South Lyon.

In the kitchen area, a windowed door that lifts into the ceiling like a garage door lets people enjoy a breeze while taking a break. “We’ve had lots of chipmunks scamper in,” said Nikki White, office manager.

One element of the former school has been kept — the lockers. Each employee has a real high school metal locker to stow personal items. “We tried to keep a little bit of the school theme,” White said.

Opening the doors at another creative business, HelloWorld (formerly ePrize), a digital marketing company in Pleasant Ridge, reveals a workplace where it’s also clear that some thought was put into providing a fun, collaborative atmosphere.

The many-chambered building’s industrial past is evident in the exposed steel beams overhead. A light green and dark purple paint scheme brings an abrupt departure from that past. Fabricated clouds hang from the high ceiling in one room. Side rooms each are named after a classic American television show, such as the appropriately named “WKRP” room that houses a recording studio.

“It was originally designed in a colorful way because we don’t believe in boring beige cubicles that don’t foster creativity,” said Janice Pollard, senior marketing manager.

The main workroom mixes anyone from software to legal in one open space to encourage collaboration. “We don’t believe people should be sequestered by discipline,” said Jen Gray, vice president of creative services.

A “market” upstairs offers convenience store-like fare employees can purchase — the honor system applies here — using the same type of scanner grocery stores use. The market also houses a foosball table and Xbox console — requisites of any modern creative workplace — and a pinball machine that has “The Simpsons” as subject matter.

This apparently continues a long tradition of workplace gamesmanship in the building: At one point in the maze of passages, the remnants of what once was a bowling alley floor appear underfoot.

A second-story rooftop deck makes for a convenient place to unwind with beers after work or a chance to grab some fresh air mid-day, which, if it’s clear enough, provides a view of the General Motors headquarters 10 miles away in downtown Detroit. If it’s not such a clear day, an outside flat screen TV must suffice.

A relaxing atmosphere of a different sort fills the offices of O’Keefe, a business turnaround consulting firm in Bloomfield Hills. The offices are in an 1822 farmhouse, considered the oldest building in town. Though the area no longer is farmland, the leafy upscale suburb doesn’t feel far removed from its rural past.

The building has held many tenants, but it still looks and feels like a farmhouse and has the same structure at heart. A conference room exists where the main dining room once was. Narrow staircases lead to upstairs offices that once were bedrooms. In the basement one can still see tree bark on the old wooden trusses, as well as some of the original stonework in the walls.

At one point a bed and breakfast was ran out of the building, and doors were added to rooms to accommodate guests. As a result, many offices have their own doorway to the outside.

It would be a shame in a place such as this not to exploit the outdoor area, so every year O’Keefe brings out the patio furniture and plants flowers.

“The flowers are spectacular. It’s a giant garden,” said CEO Patrick O’Keefe. “We kept the natural beauty of the house but also kept the functionality of the office.”