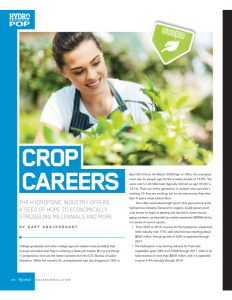 College graduates and other college-age job seekers have probably had enough reminders that they’re entering a bleak job market. To put things in perspective, here are the latest numbers from the U.S. Bureau of Labor Statistics:

That’s an entire generation of workers who just aren’t working. Or they are working, but for far less money than their Gen X peers made before them. One often overlooked bright spot in this grim picture is the hydroponics industry. Demand for organic, locally grown products shows no signs of abating and has led to some encouraging numbers, as reported by market researcher IBISWorld Inc. in a series of recent reports:

The hydroponic crop farming industry for fruits and vegetables grew 7.8% from 2006 through 2011, when it hit total revenue of more than $500 million, and it is expected to grow 4.4% annually through 2016.

The industry is still small – Starbucks alone brings in more than $3 billion each quarter – but numbers like these mean growth and potential for advancement. For example, on the retail equipment side, no single company holds market share of over 1%. Get a foot in the right door and an ambitious worker could end up leading an expanding business.

“I don’t believe we can make this movement happen fast enough by hiring employees,” says Cutter, who plans to license his business model to up to 15 franchisees this year. The franchisees would get training in business management, financing and marketing.

Cutter looks for college students and graduates in the field of environmental science. “These guys are coming out with nowhere to go,” he says.

Brent Morreale, a 26-year-old intern at Alegría Farm, got into the job a few months ago after working in construction. “I saw myself doing that for a long time, but my heart just wasn’t in it. With this, I really feel it’s doing something for me,” says Morreale, who plans to start his own business in the field.

But it’s not just young people who are being drawn to the economic opportunities of organic and hydroponic growing. Many older workers facing challenges in the job market or looking for a midlife career change are finding a fantastic second act in this industry as well.

Chris Chapin, 62, previously worked in insurance and as a wholesaler for sporting goods equipment and has an economics degree from Stanford University.

“This is a growth industry here, no question,” he insists. “There’s going to be opportunities for entrepreneurial people – and that’s in months, not years.”

His colleague, 43-year-old Duane Allee, has a degree in environmental science and worked in labs for 12 years. But after that work became an assembly-line task of sending samples out the door, he grew restless.

“Eventually the nobility of that job faded,” he says.

Allee signed up for an internship at Alegría, not knowing exactly what he plans to do in the field, only knowing that it will yield new chances for something positive. He says he is learning all he can for now and will figure out the rest as he goes.

The growing industry offers entry-level jobs that can lead to management positions. Helena DePaola, owner of Indoor Outdoor Gardener, a hydroponics supply store in Brooklyn that has been open since 1974, hired the current store manager out of high school. He’s been at the shop for 22 years.

DePaola explains that workers on the retail side of the industry can expect to earn $9 an hour when they start, and managers get up to $60,000 a year.

Of course, the greatest benefit of working in hydroponics is the potential to create positive change in the health of people and the environment. For many, getting their foot in the door of a growing industry is an added bonus.