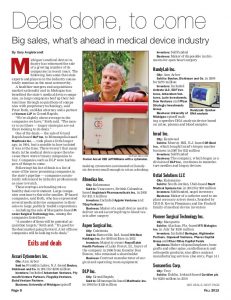 Michigan’s medical device industry has witnessed the sale of a growing number of its companies in recent years. The following lists some that state experts and players in the industry consistently mention as the most noteworthy.

A healthier mergers and acquisitions market nationally and in Michigan has benefited the state’s medical device companies, as large companies beef up their bottom lines through acquisitions of companies with proprietary technology, said Peter Roth, an M&A attorney and a partner at Varnum LLP in Grand Rapids.

“We’re slightly above average in the companies we have,” Roth said. “The money is out there — larger strategics are out there looking to do deals.”

One of the deals — the sale of Grand Rapids-based DLP Inc. to Minneapolis-basedMedtronic Inc. — took place a little longer ago, in 1994, but is notable in how isolated it was at the time. There weren’t that many deals in the medical device space then because there weren’t many companies to buy. Companies such as DLP were harbingers of things to come.

Following this list of deals is a list of some of the more promising companies in the state’s pipeline — companies consistently referenced by industry professionals as ones to watch.

These startups are heading into a healthy deal environment. Large companies continue to thirst for smaller, IP-based companies, said Roth, who has represented several medical device companies in their sales to large, publicly traded corporations — including the sale of Marquette-based Pioneer Surgical Technology Inc., among the companies listed here.

“A number of them will be potential acquisition targets,” Roth said. “It’s good for the deal market going forward. A lot of those companies will be looking to do deals.”

Ablative Solutions Inc.
City: Kalamazoo
Founded: 2011
CEO: Tim Fischell
Product/technology: A device that uses fine catheters to deactivate renal artery nerves — those that support the main artery to the kidney but also contribute to hypertension — without damaging the artery. The company expects to receive European approval in late 2014, followed by approval in 2016 from the U.S. Food and Drug Administration.

Fischell, an interventional cardiologist, comes from a family of medical entrepreneurs. He, along with his father, Robert Fischell, and brother, David Fischell, have more than 300 medical device patents and have started more than 16 companies based on their patents.
Funding: Ablative has received $9.5 million in two rounds, the second of which is still underway. Investors include BioStar Ventures and the Michigan Accelerator Fund I.

Although still offered up by local investors as a company to watch, CytoPherx has had a tough year. The company made headlines in January 2012 when it announced it had raised $34 million, the largest round for a Michigan company in three years. The announcement followed FDA approval in 2011 for a trial of the product. CEO Jim Danehy told Crain’s in early 2012 that if testing went according to plan, the company could have a device on the market by the end of 2013.

But last December, Danehy left the company in a mutual decision between him and the board, said Mina Patel Sooch, general partner at Apjohn Ventures. Nickels replaced him several months later. CytoPherx declined to comment on its current status.

DeNovo Sciences Inc.
City: Plymouth Township
Founded: 2010
CEO: Kalyan Handique
Product/technology: DeNovo makes a microfluidic system that captures and analyzes cancer cells floating in the bloodstream to detect the disease in a less painful and invasive way than traditional biopsies.
Funding: DeNovo is backed by angel investors including Roger Newton, co-founder of Esperion Therapeutics Inc.; Esperion CEO Tim Mayleben; and Walt Young, who was an investor in Accuri Cytometers. The company has raised $2 million in convertible debt, with the Detroit-based First Step Fund and Ann Arbor Spark participating. In 2011, DeNovo won the $500,000 first prize at the Accelerate Michigan Innovation Competition. The company is working toward FDA clearance.

HistoSonics Inc.
City: Ann Arbor
Founded: 2009
President and COO: Christine Gibbons
Product/technology: HistoSonics, the University of Michigan spinoff, makes an ultrasound device to noninvasively treat enlarged prostates. The device uses sound pulses to liquefy tissue.
Funding: HistoSonics has raised $11 million in one round and looks to raise $12 million to $15 million in a second. Investors include TGap Ventures, Early Stage Partners, Fletcher Spaght, Hatteras Venture Partners and Venture Investors. The company aims for commercialization and sales to begin in 2015 or 2016.