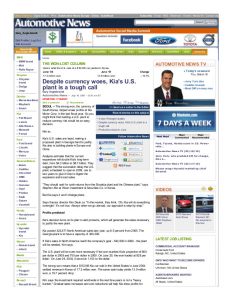 SEOUL — The strong won, the currency of South Korea, helped erase profits at Kia Motor Corp. in the last fiscal year. So you might think that building a U.S. plant to reduce currency risk would be an easy decision.

Kia’s U.S. sales are tepid, making a proposed plant in Georgia hard to justify. Kia also is building plants in Europe and China.

Analysts estimate that the current expansions will double Kia’s long-term debt, from $4.3 billion to $8.7 billion. They suggest that the automaker delay the U.S. plant, scheduled to open in 2009, one to two years to give it time to digest the expansion and boost sales.

“They should wait for cash returns from the Slovakia plant and the Chinese plant,” says Stephen Ahn at Woori Investment & Securities Co. in Korea.

Says finance director Kim Deuk Ju: “In the market, they think, ‘Oh, Kia will do everything overnight.’ It’s not true. Always when we go abroad, our approach is step-by-step.”

Kia’s decision turns on its plan to add products, which will generate the sales necessary to justify the new plant.

Kim says the investment required worldwide in the next few years is not a “heavy burden.” Gradual sales increases and cost reductions will help Kia show profits for 2007, Kim says, as will a more dependable won. The won, though strong, has stabilized at around 925 per dollar this year and is expected to stay at that level throughout 2007, both Kim and analysts say.

He expects overseas operations to break even or show profits in the third quarter ending Sept 31. And he says Kia’s plants in Korea were profitable in the quarter that ended June 30. In 2006, Kia posted an operating loss of 125.29 billion won ($135 million) on revenues of $18.8 billion.

Hyundai Motor Co. purchased Kia in 1998. After years of integration, Kia finally is ready to begin launching its next phase of original models, the companies say.

Some of the products in the pipeline for the United States are a redesigned Sorento later this year and a new crossover and a production version of the Soul mid-sized SUV concept, both next year.

One major hole in Kia’s lineup is a sports car. But the company plans to show a concept in Frankfurt in September. It will be the first project completed under the direction of design chief Peter Schreyer.

Schreyer says he wants to make an Audi TT killer and create a family look among Kia’s vehicles.

Says Anthony Moon, an analyst at Nomura Securities’ office in Seoul: “If (Kia) can ride out the next two years, they should be OK.”