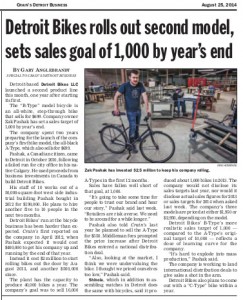 The “B-Type” model bicycle is an all-white, step-through bike that sells for $699. Company owner Zak Pashak has set a sales target of 1,000 by year’s end.

The company spent two years preparing for the launch of the company’s first bike model, the all-black A-Type, which also sells for $699.

Pashak, a Canadian citizen, came to Detroit in October 2010, following a failed run for city office in his native Calgary. He used proceeds from business investments in Canada to build Detroit Bikes.

Detroit Bikes’ run at the bicycle business has been harder than expected. Crain’s first reported on the company in April 2012, when Pashak expected it would cost $400,000 to get his company up and running by the end of that year.

“It’s going to take some time for people to trust our brand and hear our story,” Pashak said last week. “Retailers are risk averse. We need to be around for a while longer.”

“Also, looking at the market, I think we were undervaluing the bike. I thought we priced ourselves too low,” Pashak said.

The “B-Type” model bicycle is an all-white, step-through bike that sells for $699 at Detroit Bikes.

Shinola, which in addition to assembling watches in Detroit does the same with bicycles, said it produced about 1,000 bikes in 2013. The company would not disclose its sales targets last year, nor would it disclose actual sales figures for 2013 or sales targets for 2014 when asked last week. The company’s three models are priced at either $1,950 or $2,950, depending on the model.

Detroit Bikes’ B-Type’s more realistic sales target of 1,000 — compared to the A-Type’s original target of 10,000 — reflects a dose of learning curve for the company.

The company is working to land international distribution deals to give sales a shot in the arm.

Detroit Bikes also plans to come out with a “C-Type” bike within a year.