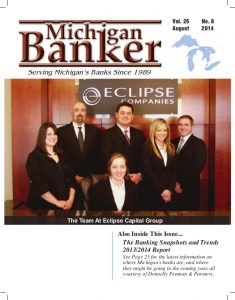 Not all commercial banking situations are straightforward. In fact, it’s a rare one that is.

But then there are those especially tricky situations, ones that call for a level of effort your average commercial banker simply doesn’t have the time to provide. In those cases, what’s needed is a team of specialists willing to roll up their sleeves and make things happen — and has the connections to do so.

Such was the case when the financial specialists at Eclipse Capital Group, who work every day with companies in tough situations as well as those that are healthy and growing, agreed to help a Southeast Michigan family whose investment real estate business had encountered some banking frustrations.

The family had developed commercial properties to rent out as office and retail space. Business was doing fine, but the small community bank that held the family’s business account was shut down by regulators in 2012. A larger regional bank took over the assets, including the mortgages for this family’s investment properties. (The family asked to remain nameless discussing the financial details of their business.)

At the same time, the notes on these mortgages had matured and the family was looking to refinance, something that should have been a routine matter for a business account in good standing. But this new bank barely returned their phone calls. Although the bank said a refinancing deal was possible, it offered little information and did not seem all that enthused about keeping the family as a customer.

“We were dragged along. It took months for them to get back to us,” said the owner of the family business.

Through the little information they did get, the family learned that the terms would be worse than before. It appeared this bank considered all of the assets it had bought from the community bank to be bad, regardless of the finer points of each account. “We were grouped with a bad group of people even though we weren’t bad. We always made our payments. We were grouped with them because we came from this bad bank,” the owner said. “Partly what made it so frustrating for us is we have nice, new buildings in nice locations, full of paying tenants. There was no reason this should have been happening.”

The family tried to find another bank based on recommendations from their own contacts but to no avail. “We were with a small local bank before and now it was very difficult to get anybody to talk to us and work with us,” the owner said.

After a year of this, the family finally contacted Eclipse Capital Group, having heard about the company through the local business press.

Rolling up the sleeves

Eclipse went to work. The firm studied the family’s case and began planning. “We go in and interview them, look at why banks are turning them down and what can we do to change their situation. Let’s come up with a creative way to get financing,” said Eclipse Vice President Katie Katzman.

The family needed a $5.8 million loan. Eclipse contacted some 200 lenders looking for a match. It took longer than expected because, although the family’s real estate business was fine, it also had a decades-old plumbing and mechanical business that had seen a few difficult years closer to the recession — still within the three-year window lenders use when looking over a business. Banks would see that when they looked at the entire operational picture of the family and get nervous.

This added to the family’s frustrations because the accounts always had been kept separate from each other, and none of this had come into the equation during the troubles with the regional bank over their real estate investment loans. “We had a number of years where we struggled and they didn’t want to lend to us because of that,” the owner said.

While searching for a lender, Eclipse also did the tedious work of unwinding the family business from the regional bank, which hadn’t kept adequate records and caused the process to drag on for months.

Eventually, Eclipse’s search churned up a bank willing to pony up $3.8 million. But the small bank couldn’t loan any more than that due to federal lending limits. So Eclipse and the bank each set about finding participant lenders.

The new bank found two willing to jump in at $1 million each, but then one of them backed out. Then the other followed suit. Fortunately, Eclipse had found one that could cover the whole $2 million shortfall. “It was kind of a shock. It’s good Eclipse was there to help them,” the owner said. “Ultimately, it was Eclipse’s participant that took on the full amount needed.”

Eclipse made sure the second lender it found was not a competitor, mindful of the fact that banks are wary of joining with other local banks that might try to entice the customer into bringing over the entire account.

The deal closed in July of this year. It had been more than two years since the family’s original bank went under, but thanks to Eclipse’s elbow grease, things were back on track. “Who knows if we could have found a bank on our own. We probably couldn’t have,” the owner said.

Better still, the terms were better than what the family had seen in its own attempts at securing a loan.

“We love dealing with small local community banks. Now have a local community bank. It’s not the same resources or lending limits as the regional bank, but we know the people there and they’re personable. Ultimately, we were very glad that’s what Eclipse ended up finding for us,” the owner said.

All along it was Eclipse’s willingness to get its hands dirty, working its long list of connections to get banks talking and comfortable enough to strike a deal. And now two banks have what an earlier bank lost: a $5.8 million account held by a family with deep business roots and influence in its community.

Eclipse takes this approach to similar banker-customer predicaments. Eclipse Founder and CEO Frank Bromley said that’s what sets Eclipse’s offerings apart from others in the world of mortgage banking. Eclipse gets intimately familiar with the operations driving the need for a deal, in order to give the deal a better chance of actually happening — a hybrid approach that blends consulting with mortgage banking.

Beginning in 1997 from a base in commercial mortgage banking, Eclipse has launched itself into areas that go further and deeper into customers’ dealings than a traditional mortgage broker. Eclipse’s team is made up of full corporate structure specialists who work on investment real estate, lines of credit, equipment lending, corporate growth financing and business turnarounds, owner-occupied real estate, inventory and purchase order financing. Eclipse has lenders for borrowers in every situation, from the very profitable to distressed or turnarounds.

The common element among all these activities is the relationship with the bank. Eclipse steps in to handle the tough situations facing the banks and their customers. The firm has thousands of lenders throughout the country and does the legwork of finding the right match for the situation at hand.

Being able to reach out to so many lenders means the terms and fees are more reasonable than might be expected, Bromley said. “Banks think we’re too expensive for their clients, but often we get better rates than what the bank can offer.”

Banks have different reasons for turning down loans, and the reasons change with the markets from year to year, based on shifting needs, economic pressures and regulations.

A few years ago, banks were struggling with customers whose properties and equipment had dropped sharply in value. In these situations, banks ask Eclipse to come in and help find lenders, allowing not only the business customers to get loans, but also helping the banks keep their customers.

Lately, investment real estate has generated more calls from banks seeking help. Unless it’s an owner-occupied property where the business is likely to work hard to stay, banks are still leery of getting into a market that’s taken a beating. While the economy has improved, it’s nowhere near where it was seven years ago, and as the economy goes, so do rents.

There’s still the chance that business tenants of these properties will go by the wayside, and those that are able to continue paying rents do so at lower rates, Katzman said.

“Banks are saying, ‘We can’t do investment real estate. Who can we call who can?'” Katzman said. “The economy is better, but it’s still not what it was. There is more consumption, there are more jobs, and we will get back to where investment real estate is a good place for banks, but right now that’s not where we are so it’s still considered risky.”

When customers in good standing come to their bank looking to refinance an investment real estate property, banks are having a hard time pulling the trigger. That puts them in a tough spot because they also don’t want to see the customer take its business elsewhere: All too often, customers end up taking their entire book of business (business checking, lines of credit, equipment loans, investment accounts) to whatever bank coughs up the loan.

“The client moves on and the likelihood of that client going back to that bank for anything is slim to none,” Katzman said.

It’s far better to be able to tell the customer that the bank knows of a firm that can help. That’s when the bank calls Eclipse and asks if the firm can help the customer.

Just as it did with the family whose investment real estate loans ran into trouble, Eclipse in these situations takes the extra work — and anxiety of losing a customer — off the banks’ hands and does what it takes to find a solution.

“What we do is help them retain clients and they make more money,” Katzman said. “We help them in their day-to-day jobs.”

Call Eclipse for more information on its referral programs at [content removed].