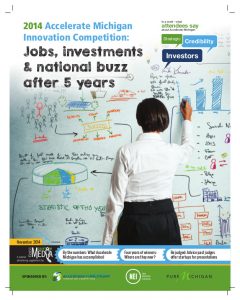 It’s fitting that a competition meant to raise Michigan’s profile was inspired by one of the most Michigan of all symbols: University of Michigan‘s big block M logo.

The big M came on a screen during an investor presentation a long way from home, in California. Sitting in the audience was Dave Egner, executive director of the New Economy Initiative and president of the Hudson-Webber Foundation.

The UM logo appeared because the investors giving the presentation all happened to have attended the school and they wanted to proudly display their alma mater. They were all now based in California, a fact that jolted Egner.

“We had sent the message to people in Michigan that if they wanted to be in venture capital or tech, they had to leave the state,” Egner said.

Egner went back to Michigan and had dinner with Mike Finney, then the head of Ann Arbor Spark, now head of the Michigan Economic Development Corp. Disappointed to see investors viewing Michigan as a flyover state, they hatched the idea to have a business plan competition that would draw investors back to see its innovative companies and entrepreneurs, and attract investor attention to the state.

It was spring 2010 and it so happened that on the schedule for later that year was the “Big Chill” University of Michigan/Michigan State University hockey game at Michigan Stadium. To entice investors to come from afar to a new event, they would give away about 50 tickets to the game.

“Mike jumped on it and said if NEI pays for it, let’s do it,” Egner said.

“Originally, it was going to have a focus on Southeast Michigan, but we quickly realized it’s bigger than that. It should encompass all entrepreneurs in the state,” said Skip Simms, senior vice president of Spark and a participant in the early discussions.

The event would be held under the auspices of this new organization. NEI underwrote the competition with $750,000, while Spark administered it and kicked in $250,000 from the Michigan Pre-Seed Capital Fund it runs for the state to cover half of the grand prize. Business Leaders for Michigan contributed another $300,000.

The Accelerate Michigan Innovation Competition would offer $1 million in cash prizes including in-kind awards for staffing, software, mentorships, space and professional services, for early-stage businesses with a proven technology and the potential to have an immediate impact on Michigan’s economy. There also would be a portion dedicated to student concepts.

There also would be a $50,000 prize for the student competition that would judge ideas for businesses. And there would be a People’s Choice award of $15,000, as well as an encore award of $25,000 for an entrepreneur over the age of 55.

UM offered up its new North Campus Research Complex as the venue for the event and sponsored tickets to the Big Chill. The event date was set for Dec. 9-11, 2010, with the final awards gala taking place the morning of the hockey game.

Organizers got the word out through the state’s university, accelerator, economic development and business communities. This was to solicit companies, as well as to gather judges to review companies that applied.

Out-of-state attendees were greeted with a true Michigan snowstorm the first morning of the event, and there were first-year hiccups behind the scenes. But more than 300 companies had applied to be there, and 600 attendees showed up to see who made it.

The economy was in darker days in 2010, and Armune appreciated the prize, using the money to stay afloat and to fund further research. The prize money, along with funding from the Michigan Economic Development Corp., kept the company going, said Eli Thomssen, Armune’s president and CEO.

“Venture funding had pretty much dried up at that point,” he said.

Armune now is on the verge of commercializing its technology to improve prostate cancer testing and reduce health care costs. Arbor Photonics was acquired by a West Coast company in 2013.

The event ended with a tailgate party and transportation to the big game for ticket holders.

That first year’s event sparked an annual competition that has awarded a combined $4 million to 47 companies over the past four years, drawing 1,100 applicants from 15 countries. Fourteen student prizes also have been given out during that time.

Accelerate Michigan attracts 600 attendees every year to the event, now held in Detroit at Orchestra Hall, and more than 70 national and international venture capital firms have engaged in the event in one form another.

The program still follows the same basic structure as the first year. The competition takes place over three rounds, taking place over several months and culminating in the annual three-day event. Applicants enter an abstract and executive summary for the first round. They cannot already have raised more than $2 million in funding already, and they should have the potential to achieve $10 million or more in annual revenue in the next five years.

About 50 judges sift through these applications and allow the ones they deem promising to pass through to the semi-finals.

At this point, businesses submit a 12-page business plan, from which half their semi-finals score is derived. The other half comes from a 10-minute presentation they must give during the three-day event.

To win the finals, a company must make its case in a five-minute elevator pitch, using a maximum of presentation slides before a panel of three or four judges.

The award money comes in at crucial, very early-stage moments when startups have the hardest time attracting investment, attention and validation. Past winners say they have used the money to fund the next phase of product development, hiring or just keeping the lights on for another year.

Beyond the awards, the event brings recognition and valuable connections that yield benefits for years to come. Where startups previously had to hit the phones in search of capital, afterwards investors are the ones calling them.

Simms at Ann Arbor Spark said he and others at BANSEM member groups regularly receive calls from out-of-state investors looking for deeper information on state startups.

The results for the past four years have more than met the goals envisioned when Accelerate Michigan was still just an idea, Simms said. “The evidence of its success is, here we are five years later celebrating our fifth one. We were prepared to say if this doesn’t work, we can do it for a couple years and we can always stop,” he said.

The competition’s organizers have done a good job getting the word out to investors outside of Michigan, said Whitney Rockley, co-founder and managing partner of Toronto-based McRock Capital. “They make it easy for out-of-state or international investors to come to the event. It’s a no-brainer as long as it works with your schedule,” Rockley said.

This year’s event, to be held November 4-6, features Susan Packard as keynote speaker. Packard is the cofounder of Scripps Networks Interactive, owner of cable television channels such as Food Network and HGTV.