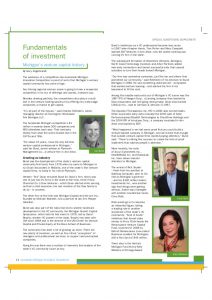 The existence of a competition like Accelerate Michigan Innovation Competition is proof of sorts that Michigan’s venture capital community has come of age.

Any thriving regional venture scene is going to have a respected competition in its mix of offerings and assets, industry folks say. Besides drawing publicity, the competitions also play a crucial role in the venture funding spectrum by offering very early-stage companies a chance to get capital.

The Accelerate Michigan competition’s $1 million in awards draws 300 companies and 600 attendees each year. That visual contrasts starkly from what the scene looked like in the 1970s and ’80s.

“For about 15 years, I was the only full-time venture capital professional in Michigan,” said Ian Bund, senior advisor at Plymouth Management Co., a venture firm in Ann Arbor.

Herbert “Ted” Doan recruited Bund for Doan’s firm, which was one of just two VC firms in the state at the time, three if Dow Chemical Co.‘s Dow Ventures — which Doan started while serving as Dow’s chief executive, the last member of the Dow family to do so — is counted.

The other firm at the time was Michigan Capital and Service Inc., founded by Michael Staebler, now a partner at law firm Pepper Hamilton.

Bund also was part of the talks that led to another landmark development in the VC community, the Michigan Growth Capital Symposium, which held its first event in 1980, led by David Brophy, another VC pioneer in the state. Brophy has been with UM since 1968 and now is the director of the UM Center for Venture Capital and Private Equity at the Ross School of Business.

The community has done a lot of growing up since. There are now plenty of investors, as well as the critical “ecosystem” of managers and professional services, to support venture-backed companies.

Along the way there was a number of moments that leaders of the state’s VC community count as key.

“Our firm was somewhat contrarian, just like Ian and others that pioneered our community,” said Rothstein, of his decision to found Beringea in 1988. He saw something underserved — companies that wanted venture backing — and started the firm in his basement to fill the void.

Among the notable early exits out of Michigan’s VC scene was the 1987 IPO of Neogen Corp., a Lansing company then backed by Doan Associates and still going strong today. Doan also backed LifeScan Inc., sold to Johnson & Johnson in 1987.

The Esperion Therapeutics Inc. IPO in 2000 also turned heads. Other successful early exits included the 2000 sale of Arbor Partners-backed BlueGill Technologies to CheckFree Holdings and the 2004 IPO of IntraLase Corp., a company incubated in Ann Arbor and backed by EDF.

“What happened is we had some proof that you could build a venture-backed company in Michigan, and we’d done that enough that outside venture capital firms started paying attention,” Bund said. “There’s nothing like success to create the kind of proof statement that catches people’s attention.”

The arrival of a Richard Snyder, as a 1998 Crain’s story calls him, and his $100 million Avalon Investments Inc., was another sign that things were getting serious. Avalon was managed with another now-familiar name, Chris Rizik.

Rizik would go on to become an influential figure, taking a leading role in another accelerant of the state’s VC community: “fund of funds” initiatives that funnel state money to firms. Rizik heads the Renaissance Venture Capital Fund, launched in 2008 by Detroit Renaissance (now called Business Leaders for Michigan) with a first fund of $45 million.

Preceding those funds, and also managed by Grosvenor, was the 21st Century Investment Fund, which launched its first fund, of $109 million, in 2006 using tobacco settlement money.

“What we really have now is a true community. Ten years ago, it was just a handful of firms trying to raise capital,” Rothstein said. “Investors have confidence in our region as well as the managers of funds.”

The 21st Century fund also invested directly into companies. One of those companies was Accuri Cytometers, which went on to be sold in 2011 for $205 million to Becton Dickinson and Co. “Accuri would not have survived without that investment,” said Jen Baird, Accuri’s co-founder.

Baird was an intern at EDF in the late 1980s and sees the contrast between the venture scene of then and now.

While there’s still “lots of room to grow,” especially in terms of capital and available managerial talent, “We’re getting to the point where have a core of management leaders who have experience,” Baird said.

Baird said the community has been experiencing a “changing of the guard” over the past decade with people such as Michael Godwin and Jason Townsend at Resonant Venture Partners “doing hard work and digging in.”

According to the numbers tallied by the Michigan Venture Capital Association, Michigan had 23 firms based in the state in 2013, with $1.6 billion under management. In 2001, there were seven firms managing $520 million. The number of investment professionals working in the VC community, 81, increased 84 percent in the five years through 2013, compared to a 13 percent national decline.

Life science has long been the leading Michigan sector for attracting venture dollars, according to annual reports from the MVCA. Information technology usually draws the second-most number of dollars. Alternative energy and advanced materials/manufacturing also are in the mix.

Deal activity has been on the rebound this year, compared to a mixed-bag 2013, when deal volume was up but dollars invested were down against 2012. Michigan had a strong year in 2012, with $244.7 million invested across 50 deals, according to the MoneyTree Report put out by PricewaterhouseCoopers and the National Venture Capital Association.