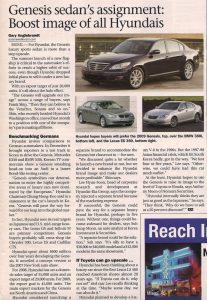 SEOUL — For Hyundai, the Genesis luxury sports sedan is more than a step upscale.

The summer launch of a new flagship is critical to the automaker’s efforts to reach a higher orbit of success, even though Hyundai dropped initial plans to sell it under a new luxury brand.

With an export target of just 20,000 units, it’s all about the halo effect.

“The Genesis will upgrade our image” across a range of buyers, says Frank Shin. “Then they can believe in the Veracruz, Sonata and so on.”

Shin, who recently headed Hyundai’s Washington office, moved last month to a position with one of the company’s parts making affiliates.

Hyundai invites comparisons to German automakers. In December it brought reporters to a test track in Korea to drive the Genesis, Mercedes E350 and BMW 530i. Korean TV commercials show a Genesis smashing head-on into an Audi in a James Bond-like testing center.

“Genesis symbolizes our determination to enter the highly competitive arena of luxury cars now dominated by the Europeans,” Hyundai Chairman Chung Mong-Koo said in a statement at the car’s launch in Korea. “Genesis will pave the way forward for our leap into the global market.”

Hyundai spent about $600 million over four years developing the Genesis. It unveiled a concept version at the 2007 New York auto show.

Hyundai considered launching a separate brand to accommodate the Genesis but chose not to — for now.

“We discussed quite a lot whether to launch a new brand or not, but we decided to enhance the Hyundai brand image and make our dealers more profitable,” Shin says.

Lee Hyun-Soon, head of corporate research and development at Hyundai-Kia Group, says the company rejected a separate brand because of the marketing expense.

If successful, the Genesis could pave the way for a separate luxury brand for Hyundai, perhaps in five years. Without one, things could become awkward for dealers, says Suh Sung-Moon, an auto analyst at Korea Investment & Securities.

If Toyota can go upscale …

Hyundai has been thinking about a luxury car since the first Lexus LS 400 reached American shores almost 20 years ago. “If Toyota can do it, why not us?” r&d czar Lee recalls thinking at the time. “Maybe some day, we can also do it.”

Hyundai planned to develop a luxury V-8 in the 1990s. But the 1997-98 Asian financial crisis, which hit South Korea badly, got in the way. “We lost four or five years,” Lee says. “Otherwise, we could have had this car much earlier.”

At the least, Hyundai hopes to use the Genesis to raise its image to the level of Toyota or Honda, says Anthony Moon of Nomura Securities.

“Hyundai internally thinks they are just as good as the Japanese,” he says. “They think, ‘Why do we have to sell at a 20 percent discount?’ ”