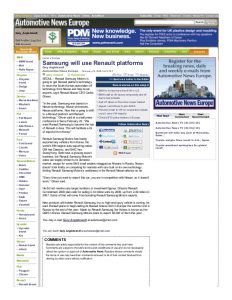 “In the past, Samsung was based on Nissan technology, Nissan processes, Nissan platforms. Now this is going to shift to a Renault platform and Renault technology,” Ghosn said at a small press conference in Seoul February 22. “We want Renault Samsung to become the hub of Renault in Asia. This will facilitate a lot of exports from Korea.”

Renault-Samsung Motors has hardly exported any vehicles from Korea, the world’s fifth largest auto-exporting nation. GM has Daewoo, and SAIC has SsangYong. Both have a growing export business, but Renault Samsung Motors’s sales are largely limited to its domestic market, except for some SM3 small sedans retagged as Nissans in Russia. Nissan doesn’t look kindly on competing for markets with cars built on its own technology, limiting Renault Samsung Motors’s usefulness in the Renault-Nissan alliance so far.

“Every time you want to export this car, you are in competition with Nissan, so it doesn’t work,” Ghosn said.

He did not mention any target numbers or investment figures. Ghosn’s Renault Commitment 2009 plan calls for selling 3.33 million units by 2009, up from 2.49 million in 2007. Some of that will come from boosting Renault Samsung Motors exports.

New products will bolster Renault Samsung, but no high-end luxury vehicle is coming, he said. Renault plans to begin selling its Renault Koleos SUV in Europe this summer and in  Russia by the end of the year. Made by Renault Samsung, the Koleos is known as the QM5 in Korea. Renault Samsung Motors plans to export 60,000 of them this year.