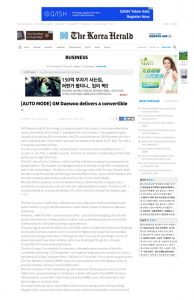 Equipped with a 4-cyclinder, 2-liter gasoline engine capable of producing 264 horsepower, the G2X can accelerate to 100 kilometers per hour from a standing start in less than 6 seconds and boasts a top speed of 227 kilometers per hour. The roof is a manually-operated soft top.

It is the only convertible under a Korean brand. The next closest is Kia Motor Corp.’s ex_cee’d — yes, that’s spelled correctly — but that car remains concept-only and lacks the performance edge of the G2X.
The G2X — short for Go 2 Extreme — will be sold by a Korean company but produced by its foreign relative. The roadster is a rebadged version of the Saturn Sky Red Line sports car sold in the United States. The Sky is, in turn, a younger sister of the Pontiac Solstice. Both the Saturn and Pontiac brands belong to General Motors Corp., owner of GM Daewoo, and the twin roadsters were warmly welcomed by critics in the United States. 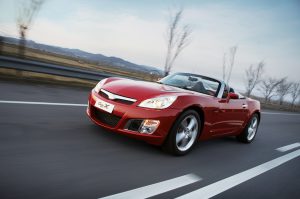 After the 2002 acquisition of former Daewoo Motors, GM turned the company into a machine for pumping out small cars into GM’s global platform system. The G2X is GM’s second attempt at sending something in the other direction through the Daewoo pipe.

The first try came in 2005 when GM Daewoo took a stab at the hotly-contested Korean sedan market, trying to sell the Australian-made Holden sedan as the luxury Daewoo Statesman.

However, unlike that first — and eventually failed — case of local rebadging, the G2X will almost have free rein in Korea, where no other local automaker produces convertibles.

The price tag of over 44 million won ($47,000), which includes the 8 percent tariff placed on imported vehicles, puts the G2X in similar or higher price ranges than convertibles produced by foreign automakers. Although the G2X may have an advantage in terms of power and speed over other vehicles, some may be tempted to opt for a cheaper convertible from more renowned brands.

The Mini Cooper S convertible, for example, is the performance version of the Mini convertible, delivering 170 horsepower — which goes a long a way on so small a car. It has a top speed of 215 kph, and goes from 1-100 kph in 7.9 seconds. It is not quite as good as the G2X, but the Mini is made by BMW, which is more renowned GM Daewoo. And it is actually cheaper, coming in at 43.8 million won.

With the exception of the Ford Mustang, which delivers 213 horsepower at a cost of 44 million won, anyone looking for G2X power or better will need to have BMW money as other powerful convertibles sold locally come from BMW, Lexus, Mercedes-Benz and others higher in the food chain.

For buyers who just want a convertible and do not care about power, the top-selling Peugeot 206CC convertible has an electronically-controlled retractable roof and costs 33 million won. Volkswagen’s New Beetle Cabriolet costs approximately 39 million won.

There’s also the question of whether Korea is a convertible market. Despite TV commercials of movie star Moon Geun-young driving around in a Mini looking for GS Caltex gas stations, Mini sold just 83 convertibles last year. Other convertibles scored similarly abysmal numbers. Less than 2,000 convertibles were sold in all of Korea in 2006.

What is more, GM Daewoo says it is not looking for massive sales figures with the car, but hops to bring about a much needed change in its brand image.

“It is true that importing the vehicle with the Saturn badge could have been better for sales than rebadging it as a GM Daewoo,” said a GM Daewoo spokesman.

“However, the main purpose of the car’s launch is not big sales figures, but it is being introduced as part of the company’s efforts at improving GM Daewoo’s brand image.”

But GM dealers are confident that a driver with his mind set on the car will not easily be swayed.
“The price is high, but for people who would consider buying the car in the first place, money will not be a major issue as they would be interested in the car’s performance,” said a dealer who requested to be identified by only his surname Park.

“People in the industry expected the price to be much higher than that of Sky Red Line in the United States ever since word came out of its release. But dealers still expect it to be very successful within the niche market.”

By Choi He-suk and Gary Anglebrandt