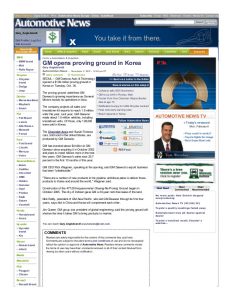 The company projects all sales and knockdown kit exports to reach 1.8 million units this year. Last year, GM Daewoo made about 1.5 million vehicles, including knockdown units. Of those, only 128,000 were sold in Korea.

The Chevrolet Aveo and Suzuki Forenza cars, both sold in the United States, are produced by GM Daewoo.

GM has invested about $4 billion in GM Daewoo since acquiring it in October 2002 and plans to invest billions more in the next few years. GM Daewoo’s sales rose 25.7 percent in the first 10 months of this year.

“There are a number of new products in the pipeline, ambitious plans to deliver those products to Korea and around the world,” Wagoner said.

Construction of the 477,000-square-meter Cheong-Na Proving Ground began in October 2005. The city of Incheon gave GM a 30-year rent-free lease of the land.

Nick Reilly, president of GM Asia Pacific, who led GM Daewoo through its first four years, says r&d in China and Korea will complement each other.