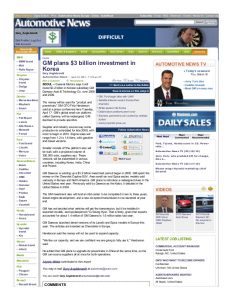 Supplier and industry sources say some production is scheduled for late 2009, with most to begin in 2010. Engine sizes will range from 1.2 to 1.8 liters, with gasoline and diesel versions.

Smaller models off the platform also will be built, with a projected volume of 300,000 units, suppliers say. Those versions will be assembled in various countries, including Korea, India, China and Poland.

GM Daewoo is winding up a $3.2 billion investment period begun in 2005. GM spent the money on the Chevrolet Captiva SUV, Aveo small car and Epica sedan, models sold variously in Europe and North America. GM plans to introduce a redesigned Aveo in the United States next year. Previously sold by Daewoo as the Kalos, it debuted in the United States in 2004.

The GM investment also will fund an r&d center to be completed in two to three years, diesel engine development, and a new six-speed transmission to be launched at year end.

GM has not decided what vehicles will get the transmission, but it be installed in exported models, said spokesperson Yu Seung Hyun. That is likely, given that exports accounted for about 1.4 million of GM Daewoo’s 1.5 million sales last year.

GM Daewoo launched diesel versions of its Lacetti and Epica models in Europe this year. The vehicles are branded as Chevrolets in Europe.

Henderson said the money will not be used to expand capacity.

“We like our capacity, and we are confident we are going to fully use it,” Henderson said.

He added that GM plans to upgrade its powertrains in China at the same time, so the GM can source suppliers all at once for both operations.