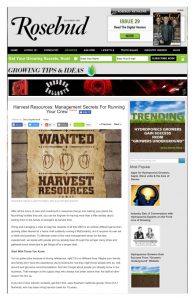 After all the hours of care and investment in resources that go into making your plants the flourishing lovelies they are, you can be forgiven for having more than a little anxiety about putting them in the hands of strangers at harvest time.

Hiring and managing a crew to reap the rewards of all that effort is an entirely different game than growing (often likened to a home chef suddenly running a McDonalds), and it requires its own set of skills and practices. To alleviate some of the crew-management stress for the less experienced, we spoke with people who’ve already been through the wringer many times and gathered some smart tips to get things off to a proper start.

Start With Those You Know

You’ve gotten jobs because of strong references, right? It’s no different here. Maybe your friends and family don’t have the experience you’re looking for, but they might know people who do. Ask around and get some recommendations. And don’t forget about people you already know in the business. That manager at the supply shop who always has better advice than the staff at other shops? Hit him up.

If you don’t have industry contacts, get them first, says Southern California grower Chris of A-1 Nutrients, who has been hiring harvest crews for 10 years.

Down the road when you might need to broaden your reach to a wider pool of potential workers, these core workers and contacts will be able to help you find people.

“You have to rely on people you know, people you can call on, people in the industry. You have to start somewhere,” he says. “That’s a pretty wild game for a complete newbie to try to do.”

Even if this only yields a few people, those few will probably know others with experience. Now you’ve got the seeds of a steady crew that you can call on for every harvest.

Down the road when you might need to broaden your reach to a wider pool of potential workers, these core workers and contacts will be able to help you find people. “It stays in the family,” says Harvest Honey, who also heads up a harvesting crew in Northern California and has been working with harvests for 10 years. “It’s three degrees of separation. Hardly ever will people hire strangers. Only in an emergency situation.”

Once you’ve got a group of reliable, competent people, you don’t want to lose anyone on your roster, especially the better ones among them.

“There’s nothing worse than doing super-tedious work and not being comfortable,” says Chris.

“It’s hot, uncomfortable. Sometimes they’re sticking you in a room with no windows,” says Harvest Honey. “You have a certain odor about you. You can’t go out to Denny’s.”

Having food and water is a good idea, as is allergy medicine. And don’t overlook the chairs.

“It may seem silly, but seating is a big issue,” she says. “A big issue I’ve seen is not enough chairs to sit on or chairs that are not comfortable. Imagine that – your workers are sitting 8 to 12 hours. You don’t want it to be like slave labor.”

Chris also emphasized eats. “Food. Good food. They want munchables,” he says. Having a pet around tends to lighten the mood as well, he says. “A dog helps keep the peace.”

For many workers, part of the happy and comfortable equation is music. This can be tricky because of the inevitably varying tastes among a group of people. Setting some ground rules and having talks early on helps to keep that one guy whose favorite band is Cannibal Corpse from assuming control of the sounds.

Harvest Honey says the wrong music can put people on edge, such as one time when a worker took the liberty of playing his own music.

“One of the people was obsessed with dubstep and nobody knew what dubstep was, and it was very upsetting. That’s all we had to listen to. Everyone got really anxious; it was the worst crew I’ve been on.”

Some people also provide TV for their workers, but you might want to leave the tube in the living room. “For some reason, people put a television in the work area,” says Harvest Honey. “Even if it’s a bunch of hippies who don’t normally watch TV, eventually they’ll find something they like and all will look up at it.”

Keeping crews happy and designating a chief were the most emphasized tips from our experienced sources. There needs to be some order in a crew, and that means a shot caller who isn’t you. Take your best and most trustworthy crew member and put that person in charge.

The chief can manage the needling day-to-day issues that arise – such as what music is played – and more importantly, keep an eye on the quality of work. You don’t want to realize that someone has been doing it wrong after the basket is full and you see a bunch of product that won’t make the grade and for which you cannot pay the worker. Now you’ve got waste and an unhappy worker.

A crew chief can also be put in charge of some of the more crucial business details, such as tracking individual worker yields for payroll purposes. The crew chief even does the job of rounding people up at harvest time. “She knows who I like, who I don’t like,” Chris says.

This has the added benefit of saving growers time, he noted. “That way the farmer can keep farming.”

Surprisingly enough, says Harvest Honey, many operations overlook the crew chief, and that leads to confusion in the ranks when there’s more than one partner in the business and all of them are giving different directions. “This is one of the bigger issues I’ve seen. You need to make sure there’s one point of contact,” she says.

Think Ahead About How You Will Pay

The main decision you’ll have to make is whether you pay by the hour or by weight. Chris believes weight is the best option. “You can’t pay by the hour. Their incentive is weight,” he says. But that means it’s doubly important that you give them quality products to work with so they aren’t spending all their time filling baskets with waste.

Bartering is an option too. Some people will work in exchange for the great products that hydroponic growing yields, or a combination of cash and product. “That’s a bonus,” says Chris. “That’s always good for the farmer. Cash is king.”

People need consistent work to make a living, even if it’s side work. The more work you have throughout the year, the easier it will be to have good people to call on. If you have a smaller operation, consider timing out the grow periods to have more harvests. “If you keep employees consistent and happy, they will stay with you forever. If you can’t keep a consistent team, you will lose money,” warns Harvest Honey.

Pause Before Firing The Laggard

In any business, you’re going to get some workers who aren’t up to snuff. But before sending them packing, try some less painful options first. Harvest Honey suggests demoting the person to something at a lower pay rate, such as feeding the crew.

If the person is completely useless, you can let them hang around until the harvest is done. “A lot of times, you’re out in the middle of nowhere, and you can’t just put someone on a bus,” she says. This also might be necessary because crews often come in packs, and you don’t want to lose half your crew because of one bonehead. “If one has to go, they all have to go.”

If the worker is only mildly obnoxious or just subpar, there’s always the option of letting the person finish out the work – and then never inviting them back for more work.

Finally, some offenses are just too egregious to stand. Stealing is not uncommon. And you’re inevitably going to get lazy people. “You get people who thought they were going to go have a vacation,” Harvest Honey finishes. In that case, you have to do what any business manager must: Fire on the spot.