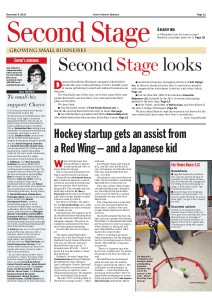 When 2014 dawned, Jim Marinoff had no idea he would spend part of it at Pavel Datsyuk’s house.

But at one point during the year, that’s exactly what he was doing.

Marinoff runs Fast Hands Hockey LLC, a business based on a patented tool he invented to help hockey players practice their puck-handling skills. The strength and conditioning coach for St. Mary’s Preparatory high school in Orchard Lake had younger people in mind when he came up with it.

But then in October, the agent for the Detroit Red Wings star called to ask whether his client could get his hands on one. … Read more at crainsdetroit.com