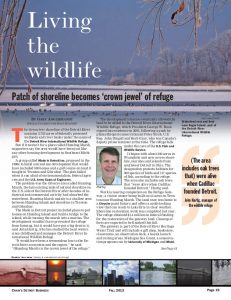 But if it weren’t for a place called Humbug Marsh, supporters say the area would have been just like any other housing development in Southeast Michigan.

A group called Made in Detroit Inc. proposed in the 1990s to build a mixed-use development that would have included 300 homes and a golf course on land it bought in Trenton and Gibraltar. The plan failed when it ran afoul of environmentalists, federal agencies and the U.S. Army Corps of Engineers.

The problem was the 410-acre area called Humbug Marsh, the last existing mile of natural shoreline on the U.S. side of the Detroit River after decades of industrial and commercial activity had absorbed the waterfront. Humbug Marsh mainly is a shallow area between Humbug Island and shoreline in Trenton and Gibraltar.

The Made in Detroit project included plans to put homes on Humbug Island and build a bridge to the island, while turning the marsh into a marina. The development wouldn’t have prevented the refuge from forming, but it would have put a big dent in it, said John Hartig, who has studied the local waters since childhood and manages the Detroit River International Wildlife Refuge.

“It would have been a tremendous loss to the Detroit River ecosystem and the region,” he said. “(Humbug Marsh) is the crown jewel of the refuge.”

The development’s demise eventually allowed the land to be added to the Detroit River International Wildlife Refuge, which President George W. Bush signed into existence in 2001, following a push by philanthropist-conservationist Peter Stroh, U.S. Rep. John Dingell and Herb Gray, who was Canada’s deputy prime minister at the time. The refuge falls under the care of the U.S. Fish and Wildlife Service.

It began with about 300 acres in Wyandotte and now covers shoreline, marshes and islands from southwest Detroit to Ohio. The designation protects habitats for 300 species of birds and 117 species of fish, according to the refuge. The area also includes oak trees that “were alive when Cadillac founded Detroit,” Hartig said.

Plans for Humbug Island once included a development of homes. After the effort fell apart, the land was added to the wildlife refuge.

Work is nearing completion on the Refuge Gateway, a visitor center being built on 44 acres in Trenton near Humbug Marsh. The land once was home to a Chrysler paint factory and offers a south-looking view that can reach to Lake Erie in clear weather. Shoreline restoration work was completed last year. The refuge obtained $1.4 million in federal funding for the restoration of the gateway land. Cleanup efforts are expected to be finished this fall.

The gateway is part of the Detroit River Heritage Water Trail and will include a gift shop, bookstore, classrooms, an observation deck, a kayak launch and resting areas. Michigan Sea Grant, a conservation program run by University of Michigan and Michigan State University, plans to put a ship at the gateway to be used as a “living laboratory” for the study of the local ecosystem. Construction of a $2.8 million boat dock and fishing pier is slated to begin next year.

A capital campaign is under way to raise $10 million and complete all of the construction work in 2014.

Lending a hand to the efforts over the years has been the Metropolitan Affairs Coalition, which helped bring fundraisers together and supported the idea of a larger concept of a wildlife refuge, said Susan Phillips of the MAC.

“Additionally, MAC has lent support to an array of other refuge projects ranging from building an environmental education shelter, observation decks, and boardwalks, to restoring natural and wetland habitats, Brownfield cleanup, and designing a fishing pier/boat dock,” she said.

“Putting up a factory is not the only thing,” she said. “You’ve got to have quality of life for workers, and this does that.”

Given the scarcity of places to put in a kayak or simply visit the Detroit River up close, the Humbug Marsh visitor center will be a regional destination point that also attracts people to move to the area, she said.

“It would be a draw for people to look at living here — we’re only 15 minutes from downtown Detroit,” Boase said.

Tiffany VanDeHey, co-owner of Riverside Kayak Connection LLC in Wyandotte, runs kayak tours of the river, including one that includes Humbug Marsh. The Gateway would give kayakers a new place to put in, eliminating the need for an upstream return trip to Wyandotte that less ambitious kayakers prefer to avoid, she said.

At least a quarter of customers come from more than an hour’s drive away, she said. Many actually come because they like the industrial view the area offers — a tour of the lower Rouge River is one of the most popular paddles the business runs.

But the undeveloped marsh clearly is a benefit.

“With the whole ‘staycation’ thing now, people want to go to an area where they get an up-north feel without having to go up north,” VanDeHey said.