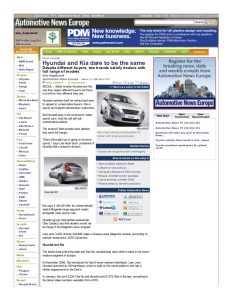 SEOUL — Sister brands Hyundai and Kia say they target different buyers but there is a limit to how different they are.

Hyundai markets itself as refined and aims to appeal to conservative buyers. Kia is sporty and targets adventurous customers.

But Hyundai says it will continue to make sporty cars. And Kia will still sell conservative sedans.

The reason? Both brands have dealers that want full lineups.

Hyundai group chief global spokesman Oles Gadacz said Kia dealers would not be happy if the Magentis were stopped.

Last year 3,635 of Kia’s 264,856 sales in Europe were Magentis models, according to market researchers JATO Dynamics.

The latest area where Hyundai and Kia risk cannibalizing each other’s sales is the lower-medium segment in Europe.

In December 2006, Kia introduced its Cee’d lower-medium hatchback. Last June Hyundai launched its i30 hatchback, which is built on the same platform and has a similar appearance to the Cee’d.

In January, Kia sold 9,224 Cee’ds and Hyundai sold 5,272 i30s in Europe, according to the latest sales numbers available from JATO.

Gadacz said both cars appeal to young buyers but to different customers within that group.

Both cars were designed and developed at Hyundai and Kia’s European design centers near Frankfurt.

Kia builds the Cee’d in its new factory in Zilina, Slovakia. Hyundai makes the i30 in Korea but will transfer production of European models

to its new plant in the Czech Republic when the factory opens in March 2009.