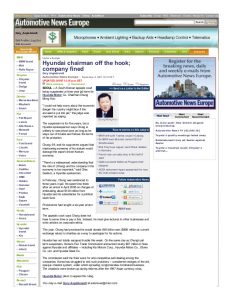 “I could not help worry about the economic danger the country might face if the accused is put into jail,” the judge was reported as saying.

The suspension is for five years, but a Hyundai spokesperson says Chung is unlikely to see prison bars as long as he stays out of trouble and follows the terms of his probation.

Chung, 69, and his supporters argued that imprisoning someone of his stature would damage the export-driven Korean economy.

“There’s a widespread understanding that the role of (Chung) and his company in the economy is too important,” said Oles Gadacz, a Hyundai spokesman.

In February, Chung was sentenced to three years in jail. He spent time there after an arrest in April 2006 on charges of embezzling about $100 million from Hyundai and its subsidiaries for a political slush fund.

The appeals court says Chung does not have to serve time or pay a fine. Instead, he must give lectures to other businesses and write articles on corporate ethics.

This year, Chung had promised he would donate 840 billion won ($896 million at current exchange rates) to charities as a way to apologize for his actions.

The commission said the fines were for anti-competitive self-dealing among the companies. Korea has struggled to end such practices — considered vestiges of the old, opaque chaebol system, under which sprawling conglomerates dominated business. The chaebols were broken up during reforms after the 1997 Asian currency crisis.