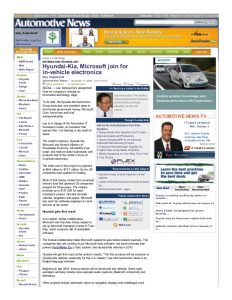 Lee is in charge of the Automotive IT Innovation Center, an incubator that opened Nov. 3 in Uiwang, a city south of Seoul.

The center’s backers, Hyundai-Kia, Microsoft and Korea’s Ministry of Knowledge Economy, will identify local small- and medium-sized businesses with products that fit the center’s focus on in-vehicle electronics.

The initial cost of the project is projected at $6.8 million to $13.7 million. So far, 89 companies have applied for funding.

Most of that money comes from an annual ministry fund that sponsors 20 companies’ projects for three years. The ministry provides up to $137,000 for each company’s project. Hyundai provides vehicles, engineers and space. Microsoft has sent two software engineers to work full time at the center.

In an earlier, similar collaboration, Microsoft and Fiat Auto Group helped to set up Microsoft Innovation Center in Turin, Italy, which conducts r&d of embedded software.

Hyundai will get first crack at the center’s results. “The first products will be exclusive to Hyundai-Kia vehicles, especially for the U.S. market,” Lee told Automotive News in an English-language interview.

Beginning in late 2010, those products will be introduced into vehicles. Some early examples will likely include voice-operated audio systems, Bluetooth connectivity and telematics.

Other projects include panoramic views on navigation displays and multilingual voice recognition.

An “eco-driving” project aims to use real-time traffic data to help drivers save fuel. The system, integrated with the navigation system, will generate a monthly report to be e-mailed to the car’s owner with data on driving habits, fuel use, driving time and fuel costs. A similar system run by Nissan Motor Co. in Japan won an award from the Japanese government.

The center is in a Hyundai-Kia building that has been used for several years as a startup incubator. Map&Soft, a local maker of navigation maps, was a prior tenant. The company now sells maps of Korea to Honda Motor Co. and Toyota Motor Corp.’s Lexus unit, Lee said. Hyundai liked the startup’s performance enough to buy the company.