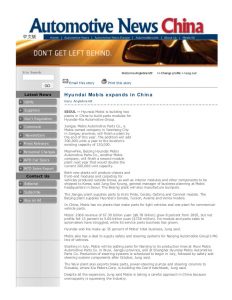 Jiangsu Mobis Automotive Parts Co., a Mobis-owned company in Yancheng City in Jiangsu province, will finish a plant by the end of this year. The addition will add 300,000 units a year to the location’s existing capacity of 130,000.

Both new plants will produce chassis and front-end modules and carpeting for vehicles produced outside Korea, as well as interior modules and other components to be shipped to Korea, said Jung Soo Kyung, general manager of business planning at Mobis headquarters in Seoul. The Beijing plant will also manufacture bumpers.

In China, Mobis has six plants that make parts for light vehicles and one plant for commercial-vehicle parts.

Mobis also has a deal to supply safety and steering systems for Nanjing Automobile Group’s MG line of vehicles.

Despite all the expansion, Jung said Mobis is taking a careful approach in China because overcapacity is squeezing the industry.