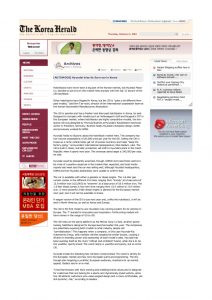 Hatchbacks have never been a big part of the Korean market, but Hyundai Motor Co. decided to put one on the market here anyway with the July 12 launch of the i30 hatchback.

Other hatchbacks have flopped in Korea, but the i30 is “quite a bit different from past models,” said Kim Tae-nyen, director of the international cooperation team at the Korean Automobile Manufacturers Association.

The i30 is sportier and has a fresher look than past hatchbacks in Korea, he said. Designed to compete with models such as Volkswagen’s Golf and Peugeot’s 307 in the European market, where hatchbacks are highly competitive models, the lowstance i30 was designed by Thomas Buerkle at Hyundai’s Russelsheim technical center in Frankfurt, Germany. Buerkle heads Hyundai’s European design center and previously worked for BMW. Hyundai holds no illusions about the hatchback market here.

The company has low-volume expectations of 20,000 units per year for the i30. Selling the i30 in Korea as a niche vehicle helps get rid of excess inventory and helps “keep the factory going,” as Hyundai’s international spokesperson, Oles Gadacz, said.

The i30 is built in Ulsan, but later production will shift to Hyundai’s plant in the Czech Republic when it opens next year. The overseas sales target is 240,000 per year, he said.

Hyundai could be pleasantly surprised, though. KAMA’s Kim said there seems to be more of a positive response in the market than expected, and local media reports last week said the car was selling well, although Hyundai headquarters, KAMA and two Hyundai dealerships were unable to confirm that.

The car is available with either a gasoline or diesel engine. The 1.6-liter gas version comes in five different trim lines ranging from “trendy” at a base price of 12.8 million won ($13,900) to “extreme” at a base price of 18.6 million won. The 1.6-liter diesel comes in four trim lines ranging from 15.4 million to 19.5 million won. A more powerful 2-liter diesel engine is planned for the European market next year, but it will not be available in Korea.

A wagon version of the i30 is due next year and, unlike the hatchback, it will be sold in North America, as well as Korea and Europe.

The i30 is the first model to use Hyundai’s new naming system for its vehicles in Europe. The “i” stands for innovation and inspiration. Forthcoming models will have names in the range of i10 to i50.

The i30 rests on the same platform as Kia Motors Corp.’s c’eed, another sportylooking hatchback designed for Europe launched earlier this year. The companies are potentially exposing both models to what industry people call “cannibalization.” This happens when a company, in this case Hyundai-Kia Automotive Group, sells multiple vehicles targeted at similar buyers, causing a dilution in branding power and weakening of each model’s sales. Hyundai has been pushing itself as the more “refined and confident” brand, while Kia is to be the youthful, sporty brand. The cee’d clearly is youthful and sporty, but so is the i30.

Hyundai insists the branding has not been compromised. The cee’d is strictly for the European market and has more European parts and engineering. The i30, though also targeting a youthful, European audience, maintains its up-market appeal, Gadacz said in an e-mail.

“C’eed harmonizes with Kia’s exciting and enabling brand values and is designed for customers that are looking for a sporty and dynamically styled vehicle, while the i30 attracts customers who value elegant design and a more comfortable, yet still dynamic, ride,” according to Gadacz.

Hyundai is probably, in part, trying to target people who like to customize tuner cars, and an i30 club has already been formed, said Kim Chang-kyun, a promoter at Carmania, an association of car clubs. The i30 looks fine, he said, but it is too early to give a full critique.

“It looks a lot like the cee’d, but since cee’d isn’t coming out in Korea, I don’t really see a problem with that,” Kim said.

Choi He-suk contributed to this report.