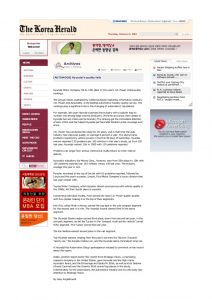 The annual report, published by California-based marketing information company J.D. Power and Associates, is the leading automotive industry quality survey. The rankings play a significant role in the changing of automakers’ reputations.

For example, last year Hyundai surprised the industry with a sudden leap to number one among large-volume producers. (Porsche and Lexus were ahead of Hyundai but are small-volume brands.) The ranking got the immediate attention of auto critics and has helped Hyundai get favorable Western press coverage ever since.

J.D. Power has conducted the study for 20 years, and in that time the auto industry has improved quality on average 6 percent a year. The study tracks problems reported by vehicle owners in the first 90 days of ownership. Hyundai owners reported 125 problems per 100 vehicles in this year’s study, up from 102 last year. Hyundai ranked 11th in 2005 with 110 problems reported.

Problems can range from serious mechanical malfunctions to minor interior defects. Hyundai’s subsidiary Kia Motors Corp., however, rose from 25th place to 13th with 125 problems reported per 100 vehicles versus 136 last year. The industry average this year is 124.

Porsche remained at the top of the list with 91 problems reported, followed by Lexus and this year’s surprise, Lincoln, Ford Motor Company’s luxury division that last year ranked 12th. Toyota Motor Company, which became almost synonymous with vehicle quality in the 1990s, fell from fourth place to seventh.

Concerning individual models, Ford earned the most J.D. Power quality awards with five models making it to the top of their segments. Kia’s Rio, called Pride in Korea, earned the top spot in the sub-compact segment for the second year in a row. The Hyundai Accent earned third in the same segment. The Hyundai Elantra sedan earned third place, down from second last year, in the compact segment, as did the Tucson in the “compact multi-activity vehicle” (small SUV) segment. The Tucson scored first last year. The Kia Sedona earned second place in the van segment.

Top Hyundai earners missing from this year’s list were the Tiburon (Tuscani) “sporty car,” the Sonata midsize car, and the Hyundai Azera (Grandeur) large car. A Hyundai-Kia Automotive Group spokesperson refused to comment on the record about the report.

Oddly, another report earlier this month from Strategic Vision, a marketing research company in the United States, gave Hyundai and Kia high marks. Hyundai’s Azera, and the Entourage and Santa Fe SUVs, as well as Kia’s Sedona (Grand Carnival) and the Sorento SUVs scored top places in the study. Unfortunately for the automakers, the automotive industry and its critics pay less attention to Strategic Vision.

Choi He-suk contributed to this report.