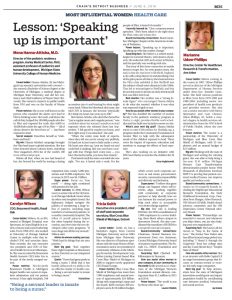 Big win: Hanna-Attisha’s campaign brought the Flint lead issue to national and international attention. She has been honored about a dozen times, including Time magazine’s 2016 list of the world’s 100 most influential people.

Before all that, when no one had heard of her, she braved the world by tossing a daring accusation into it and bracing for what might come back. When the blowback did come, she told CNN in January, she became “physically ill. I think my heart rate went up to 200.”

But Hanna-Attisha, who describes herself as “just a regular mom and a regular person,” was confident about her research numbers on lead exposure when she released them last September. “I felt good for maybe two hours, and then right away I was attacked,” she said.

“When the entire state body of experts, when they tell you you’re wrong very publicly, it’s hard not to just want to hide under a cover. My heart rate shot up, I put my hand out and could feel it shaking. But you can’t have courage with fear. Things don’t come easy — you have that tachycardia, you have that anxiety.”

That lasted about a week until the state conceded she was right. “For me, it lasted only a week. For the people of Flint, it lasted 18 months.”

Power metrics: She is now well known as the person who sounded the alarm over lead in Flint’s drinking water. Her work, well above the call of duty, helped the 100,000 people who live in Flint and exposed the truth that 8,000 to 10,000 kids under the age of 6 in Flint — “all of whom deserve the best from us” — had been exposed to lead.

Secret weapon: Describes herself as “stubborn and loud.”

I recently learned to: “Give commencement speeches.” She’s been asked to do eight since the Flint crisis; she’s done five.

Board/community connections: Board member, Michigan Chapter of the American Academy of Pediatrics.

Power lesson: “Speaking up is important. Speaking up with data makes change.”

Surprising fact: Her father is a retired metallurgist for General Motors, with dozens of patents. He worked at GM’s tech center in Warren, and his specialty was working with zinc.

The irony of this close connection to metals doesn’t escape Hanna-Attisha’s notice. An even greater irony, she said, is that she was born in Sheffield, England, a city with a deep history in metalworking. One of the grim pieces of history she’s learned since the Flint crisis unfolded is that Sheffield was the subject of lead water disasters in the 1890s. Another is that this led to miscarriages in Sheffield, and that in turn led some to invent an early abortion pill that was filled with lead. “That’s where I was born.”

Best mentor: Her mother was a “strong female figure” who encouraged Hanna-Attisha to do what she wanted, whether it was what was expected of girls or not.

How do you assist other women in your company?Hanna-Attisha has doubled the number of women faculty in the pediatric residency program at Hurley to eight, provides flexible work schedules and has built new lactation rooms on-site.

What changes have you seen in how women wield power? Mentoring among women has moved from “buzzword to action,” she said. And more women hold elected office and work in C-suites, she notes.

What’s your next big goal? Hanna-Attisha wants to raise $100 million for flintkids.org, a program under the Community Foundation of Greater Flint to help with the subsequent needs of the children exposed to lead. These cover the impact of exposure, education and nutrition to manage the effects of lead exposure. She’s also working on an initiative with MSU and Hurley to monitor the children for 20 years.

Does she root for UM, MSU or WSU with sports or other competitive spheres? “This will probably offend a lot of people, but I’ve never been to the Big House or an MSU game. … I root for everybody,” she adds diplomatically. The schools root for her, too: She appeared on the cover of both UM’s and MSU’s alumni magazines this year.