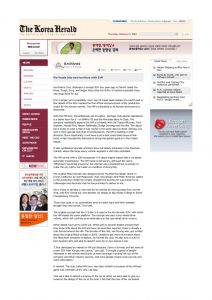 Kia Motors Corp. displayed a concept SUV two years ago in Detroit called the Mesa. Tough, boxy, and bigger than other Kia SUVs, it marked a possible foray into large SUVs for Kia.

It’s no longer just a possibility. Kia’s July 24 sneak peek release of a sketch and a few details of the SUV marked the first official announcement of the production model for the Korean market. The HM is scheduled to hit Korean showrooms in December.

With the HM SUV, Kia ambitiously set its sights – perhaps motivational aspirations is a better term for it – on BMW’s X5 and the Mercedes-Benz M-Class. The company realistically expects the HM to compete with the Toyota 4Runner, Ford Explorer, Honda Pilot, Nissan Pathfinder, Dodge Durango and the like. The signal Kia is trying to send is that it may not be in the same class as those vehicles, but with a more upscale look than its predecessors, the HM is heading in that direction.

More importantly, it will have a price that could make buyers think twice, a feat Hyundai-Kia Automotive Group has gotten good at in the United States. It also symbolizes Hyundai and Kia’s slow but steady advances in the American market, where the large luxury vehicle segment is still hotly contested.

The HM comes with a 250-horsepower V-6 diesel engine mated with a six-speed automatic transmission. The HM name is temporary, although the name “Offenbach” bouncing around on the internet was considered but is unlikely to make the cut, said a Kia insider on condition of anonymity.

The original Mesa concept was designed at the Hyundai-Kia design center in Irvine, California, by Joel Piaskowski. Kia’s new design chief Peter Schreyer added to the production model the simple, straight-line touches he was known for at Volkswagen and Audi and that he has promised to deliver to Kia.

Kia is trying to develop a new look for its vehicles by moving away from curved lines, said Kim Chong-sul, who teaches car design at Ajou Motor College in South Chungcheong Province.

“Every ten years or so, automakers tend to switch back and forth between straight lines and curves,” Kim said.

The original concept had the 3.5-liter V-6 used in the Kia Sorento SUV, with which the HM shares the same platform. The concept was also a four-wheel-drive vehicle, which will continue as an alternative to the rear-wheel drive version. Other details have yet to come out.

While calls to several dealers showed that they know little about the HM and have received few inquiries, there is already a club formed around the HM. The founder of the club, Lee Myung-won, got excited about the original Mesa concept in 2005. Unable to get more information about the Mesa from company or dealers, he formed the club. He also runs a club for Kia’s Sorento SUV and said he doesn’t work for or own shares in Kia.

“I first developed an interest in HM just because I drive a Sorento and the news of a new SUV from Kia got me curious,” Lee said. “I thought a group of people interested in the vehicle would give us more leverage in prying info out of the company and other industry sources, and more people means more sources and more information.”

It worked. The club, called HM Love, has been invited to previews of the HM and gains new members every day, Lee said.

But like everyone else at this point, he is not sure what the final version will look like. “As for the design now, or the design of the car that will be released later this year, I couldn’t really comment as the company said that it will be making adjustments,” Lee said.

That especially goes for the version that will go to North America, the market for which the HM was conceived. Important design elements, such as the grill and trim, will be changed to suit American tastes. Kia has yet to officially release information on the North American model, but it will come with a V-8 gasoline engine, a first for Kia in North America. It is tentatively scheduled to go on sale there in the third quarter of 2008.