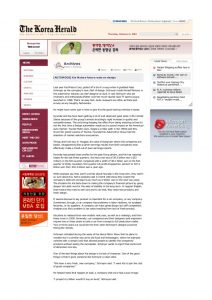 Last year Kia Motors Corp. pulled off a bit of a coup when it grabbed Peter Schreyer as the company’s new chief of design. Schreyer made himself famous in the automotive industry as chief designer at Audi. It was Schreyer who set reviewers and enthusiasts aflutter over the much-lauded Audi TT sports coupe, launched in 1998. That’s no easy feat. Auto reviewers are often as fickle and snooty as any haughty fashionista.

He might have come just in time to give Kia the good-looking vehicles it needs.

Hyundai and Kia have been getting a lot of well-deserved good press in the United States because of the group’s almost shockingly rapid increase in quality and competitiveness. The only thing keeping the effect from being shocking is that it’s not the first time a foreign automaker made such a sound impact on the American auto market: Toyota Motor Corp. forged a similar path in the 1980s and 90s. Given the grand success of Toyota, Hyundai-Kia Automotive Group has the attention of market watchers everywhere.

Things aren’t all rosy in Yangjae, the area of Gangnam where the companies are based. Disappointing first quarter earnings results from both companies have effectively made a trend out of poor earnings reports.

While analysts say they aren’t worried about Hyundai in the long term, they aren’t so sure about Kia. Some analysts said in recent interviews they expect the company’s debt will increase to as much as 4 trillion won in the next two years. The situation for Kia boils down to risking the company’s financial picture by going deeper into debt now for the sake of stability in the long term. In regular English, that means they need to sell cars and to do that, they need new products and fresh design.

It seems obvious to say product is important for a car company, or any company. Sometimes, though, a car company has problems in labor relations, its outdated factories, or its suppliers. A company can have great design but stiff competition. Analysts say Kia’s problem is low sales resulting from lack of fresh product.

Kia plans to release three new models next year, as well as a redesign, and then three more in 2009. Generally, car companies and their designers and engineers require two or three years to take a car from concept to full production reality. Two or three years out would be the time when Schreyer’s designs would be hitting the streets.

Schreyer indicated during the week of the Seoul Motor Show that he plans to remake Kia in a similar way as he did Audi and Volkswagen, where he stamped vehicles with a certain look that allowed people to identify the companies’ products without seeing the nameplate. Schreyer wants to inject that same kind of distinction into Kia.

One of the bad things about Kia design is its lack of character. One of the good things is that it gives someone like Schreyer a clean slate.

“We have a very fresh, new company,” Schreyer said. “I want Kia to join the club of great companies.”

He helped make that happen at Audi, a company that once had a poor image.

“I prayed my father wouldn’t buy an Audi,” Schreyer said.

The Kia Sorento SUV and Morning mini car were vehicles that first caught Schreyer’s attention, but the problem is that altogether Kia has too many disconnected styles, he said. The Sportage small SUV also caught his eye. “It’s a character,” he said, but added that the next one is going to have a more masculine look.

Kia, meanwhile, hasn’t been sitting on its hands. The Kia cee’d sport wagon was launched in Europe this year, and a convertible concept version, the ex_cee’d, was shown at the Geneva auto show. Three new concepts have been shown at auto shows around the world so far this year, and more are to come. A new sports concept is expected to be shown in Frankfurt in September.

Kia officials often talk about their plans to differentiate Kia from Hyundai by giving Kia a sportier look compared to a more upscale, staid vision for Hyundai. Schreyer said Kia should do that but not obsess about it. It’s better to run toward a goal than run away from a non-goal. “We’re not going where they’re going,” he said.

Kia has three design centers: Namyang, South Korea; Frankfurt, Germany, where Schreyer is based; and Irvine, California. The design chiefs from the centers meet monthly.

Designers need room to move. General Motors Corp. was derided in the 1980s for boring, out-of-fashion designs that resulted from a design-by-committee approach. In this approach, design comes up with something, then finance, engineering, marketing and every other department adds its two cents until the car that comes out is as bloodless as possible, or at least that was the judgment rendered unto GM at the time.

Analysts say Schreyer has the green light to actually affect design in a significant manner. In fact, it was Kia president Chung Eui-sun, son of Hyundai Automotive Group’s chairman Chung Mong-koo, who wanted Schreyer, said Anthony Moon, analyst at Nomura Securities’ Seoul office, indicating that a real importance has been placed on design.
“I’m sure they will give him a lot of leeway,” Moon said.

Kia could see a turnaround in a few years if strong sales follow the new models, analysts said. Meanwhile, they expect more bad news as the won isn’t likely to weaken, and competition is getting fiercer globally while Kia’s models wait for new designs.