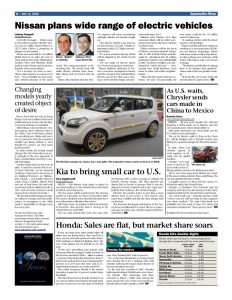 SEOUL — Kia Motors Corp. plans to export its new Soul small car to the United States and China in March, says a Kia source.
The five-seater will be produced for the Chinese market at a Kia plant in China in December 2009. The source declined to be identified because he is not authorized to talk about the matter.

Suh Sung-moon, an analyst at Korea Investment & Securities, also said the Soul is coming to the United States in early 2009.

The car, code-named AM, is the next step, after the Borrego SUV, in Kia’s strategy to reshape the brand’s exterior design. The Soul concept was shown first in Detroit in January 2006. It was displayed in Geneva in March with a new “tiger nose” grille by Peter Schreyer, Kia’s head of design.

Schreyer has said he wants to give Kias a more distinct look. In his corner is Tom Kearns, who came from Cadillac and did the main design work on the Soul.

The Soul was developed with buyers of the Toyota Scion and Honda Fit in mind. The car is expected to get a 2.0-liter, four-cylinder engine with front-wheel drive.