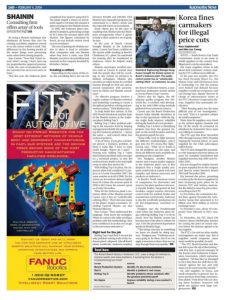 SEOUL — South Korea’s Fair Trade Commission wants to do more to shield suppliers in the country from illegal price cuts by automakers.

But many suppliers refuse to talk about their customers’ actions, making the FTC’s efforts more difficult.

In the past two months, the FTC has fined Hyundai Motor Co., Kia Motors Corp. and GM Daewoo Auto & Technology Co. But the actions were limited and delayed because suppliers would not cooperate, said Lee Hyung Sam, deputy director in charge of subcontractor issues at the FTC’s Business Cooperation Bureau. Suppliers fear automaker retribution.

“Their keeping quiet was the most difficult part of our investigation,” Lee said. “This is a sensitive subject for small companies.”

More than 60 suppliers were listed in the actions against Hyundai and Kia. Of the nearly 40 contacted via telephone by Automotive News, none was willing to comment.

The FTC says that from December 2002 through January 2003, Hyundai improperly lowered prices on parts supplied for the Click subcompact sold in Korea. The FTC also charged the automaker with improper payment delays on parts for complete knockdown kits supplied between July 2004 and October 2005.

Kia was charged for similar reasons on parts supplied for its Rio compact and Spectra sedan between March 2003 and December 2005.

Kia lowered the prices, promising to make up for the loss to suppliers by later increasing parts prices for its Sorento SUV and Sedona minivan. But Kia failed to raise the prices later, according to the FTC.

In November, the commission levied fines against Hyundai-Kia Automotive Group that amounted to 6.3 billion won ($6.8 million at current exchange rates).

In Hyundai’s case, about 40 companies were affected; in Kia’s case, 34.

In December, the FTC fined GM Daewoo about $56,000 plus interest for cutting the price of certain mirrors below the amount agreed to by the supplier.

The FTC’s Lee said no other similar investigations are under way. But if suppliers would cooperate, many more would be possible, he said.

“The FTC fined Hyundai and Kia, but this is just the tip of the iceberg,” said Kim San, a general manager of the Korean Auto Industries Cooperation Association, which represents suppliers. “All that they’ve managed to do is fine them for stuff that is obviously against the law and only what can be seen from the outside.”

He said suppliers in Korea, and small companies in general, face intense pressure from large customers. Kim added: “Only those who are closing down business tomorrow will speak out against such large conglomerates.”