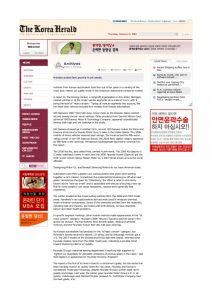 Vehicles from Korean automakers took four out of ten spots in a ranking of the most toxic interior air quality levels in the American automotive consumer market.

A report by The Ecology Center, a nonprofit organization in Ann Arbor, Michigan, ranked vehicles in all the major vehicle segments on a scale of 1 to 5, with 5 being the level of “most concern.”

GM Daewoo showed up in another form, as well. GM Daewoo makes the Reno and Forenza small cars for Suzuki Motor Corp.’s sales in the Unites States. The 2006 models of those vehicles received poor ratings. The Forenza had the fifth-worst rating overall. A non-GM Daewoo Suzuki, the 2006 Aerio station wagon, appeared as fifth-best in the rankings. GM daewoo spokespeople declined to comment on the report.

Ssangyong Motor Co. and Renault Samsung Motors do not have American sales.

Automakers and their suppliers use various plastics and glues when putting together a car’s interior. Sometimes the materials themselves give off odors and gases; sometimes the glues do. Collectively, the effect is what is commonly known as the “new car smell” and is associated with the joy of buying a new car. But for some people it can cause headaches, nausea and a generally bad experience.

The center studied all the major-selling vehicles from the 2006 and 2007 model years. Handheld x-ray spectrometry devices were used to measure chemical levels of interior components. Some of the chemicals emitted from the materials, including lead and chlorine, are linked with birth defects, nervous disorders, cancer and other health problems.

In specific segment rankings, other Korean vehicles made appearances in the “of most concern” category. Hyundai’s 2006 Tiburon (Tuscani) was the worst in the sports car division. The Kia Sorento SUV, Amanti sedan, Sedona (Carnival) minivan, and the Hyundai Tucson SUV also had poor rankings.

No Korean automakers had products in the “of least concern” category, but Hyundai’s Sonata received a decent 1.9 rating, and its Entourage minivan got a 1.6. The 2007 models of the Sonata and Entourage were tested, whereas other Hyundai models came from the 2006 model year, indicating a possible trend toward improving interior air quality.

Hyundai Group’s materials testing department is working with suppliers to “tighten our standards for allowable emissions of noxious gases in the cabin,” said Oles Gadacz, a spokesman for Hyundai-Kia Corp. Research.

The report is the first of its kind in that it’s a consumer’s guide, but the center has been tracking interior air quality levels for two years.

Hyundai and Kia have consistently made poor showings, despite Hyundai Group’s overall rapid rise in quality and image. Last year, the center gave Hyundai Motor Group a D- in air quality. Volkswagen and DaimlerChrysler received Fs. Ford Motor Company had the best grade, a B.

Not surprisingly, it appears consumers get what they pay for. While nine out of 24 of the models in the entry market small car segment had air toxicity levels in the red zone, none of the 10 luxury sedans did. Neither did any of the 16 upscale sedans score poorly. Only two of the 24 small cars had high ratings: the 2007 Chevrolet Cobalt and the 2007 Pontiac G5, both made by GM Daewoo’s parent company, General Motors.

Meanwhile, six out of the 26 luxury and upscale models had scores in the “least concern” levels. It should be noted that, luxury cars aside, brand image provided little comfort. Nameplates that were respected well before Hyundai and Kia began their march toward the top weren’t spared: Toyota, Nissan, VW and Mazda all had blemishes, too.