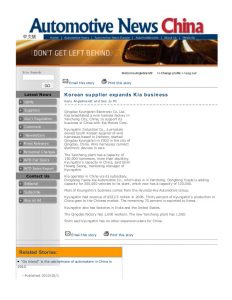 The Yancheng plant has a capacity of 150,000 harnesses, more than doubling Kyungshin’s capacity in China, said Shim Hwang Seong, marketing manager of Kyungshin.

Kia operates in China via its subsidiary, Dongfeng Yueda Kia Automobile Co., which also is in Yancheng. Dongfeng Yueda is adding capacity for 300,000 vehicles to its plant, which now has a capacity of 130,000.

Most of Kyungshin’s business comes from the Hyundai-Kia Automotive Group.

Kyungshin had revenue of $522.5 million in 2006. Thirty percent of Kyungshin’s production in China goes to the Chinese market. The remaining 70 percent is exported to Korea.

Kyungshin also has factories in India and the United States.

Shim said Kyungshin has no other expansion plans for China.