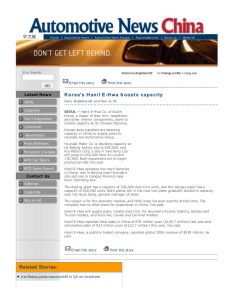 SEOUL — Hanil E-Hwa Co. of South Korea, a maker of door trim, headliners and other interior components, plans to double capacity at its Chinese factories.
Korean auto suppliers are boosting capacity in China to supply parts to Hyundai-Kia Automotive Group.

Hyundai Motor Co. is doubling capacity at its Beijing factory site to 600,000, and Kia Motors Corp.’s site in Yancheng City will jump to 430,000 from its current 130,000. Both expansions are to begin production late this year.

Hanil E-Hwa operates two main factories in China: one in Beijing near Hyundai’s site and one in Jiangsu Province near Kia’s Yancheng site.

The output is for the domestic market, and Hanil does not plan exports at this time. The company has no other plans for expansions in China, Yoo said.