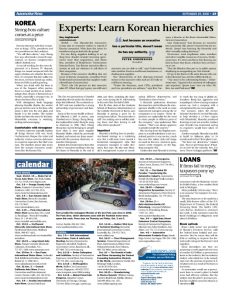 SEOUL — The Hyundai-Kia Automotive Group says its corporate culture is typical of Korean companies. What does this mean for outsiders trying to deal with the group?

For one thing, suppliers looking to set up shop here should consider licensing agreements more than acquisitions, says Hwan Hur, president of BorgWarner Transmission Systems Korea. Leading Korean executives like to remain at the top so they are reluctant to sell slices of their companies.

Because of the executive shuffling that can occur at Korean companies, consultant Peter Underwood recommends that suppliers make a broad base of connections.

“Don’t rely 100 percent on that executive sales VP. When that guy’s gone, you still want someone you are able to call,” says Underwood, who matches Western and Korean businesses, including auto suppliers.

One characteristic of this chairman-oriented system is that executive titles such as CEO take on a different meaning.

“Under the chairman, most CEOs, presidents and vice presidents are advisers,” says Kim Tae-nyen, a director at the Korea Automobile Manufacturers Association.

Says Underwood: “Just because an executive has a particular title doesn’t mean he has any authority. Spend time learning the hierarchy and who’s actually making decisions.”

It’s often said here that Koreans are kind to those they know, whether they are Korean or not.

So while they can sometimes adopt an unappealing me-first attitude in public spaces, if you go to the home of the same Korean who cut in line ahead of you, you will undoubtedly be doted on.

“You need to be schmoozing bosses,” Underwood says. “Appeal to the emotions of colleagues and superiors. Spend more time on what Mr. Kim, Lee and Park need.”