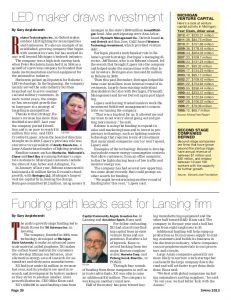 Relume Technologies Inc. in Oxford makes outdoor LED lighting for municipalities and businesses. It’s also an example of an established, growing company that began with automotive roots but has worked its way well beyond Michigan’s bedrock industry.
The company was a high-tech startup back when Peter Hochstein launched it in 1994 as a spinoff of a previous company he founded that made instrumentation and test equipment for the automotive industry.
Hochstein picked up 20 patents for Relume’s LED technology. In the beginning, the company mainly served the auto industry but then branched out to serve commercial and military customers. In more recent years, the company has seen rapid growth due in large part to a strategy of targeting municipalities.
Thanks to that strategy, Relume’s revenue has more than doubled since 2007. Last year the company posted $10 million and is on pace to reach $16 million this year, said CEO Crawford Lipsey, whom the board of directors brought on in 2010. Lipsey’s previous role was executive vice president of Acuity Brands Inc., a large Atlanta-based maker of lighting products.
Familiar names such as Starbucks, McDonald’s, Chase and Best Buy are among Relume’s corporate customers. Municipal customers include the cities of Ann Arbor and Arlington, Va.
In January of last year, Relume announced it had raised a $7 million Series D round to fund growth, with Beringea LLC, Michigan’s largest venture capital firm, leading the charge. Beringea committed $3.2 million, using money it manages in the state’s $300 million InvestMichiganfund. Also participating were Ann Arbor-based Plymouth Management Co., Detroit-based Invest Detroit and San Jose, Calif.-based Western Technology Investment, which provided venture debt.
Beringea played a matchmaker role in Relume’s growth strategy. Beringea’s managing director, Jeff Bocan, who is on Relume’s board, led the search that brought Lipsey into the company and helped make the connections with other local investors. Beringea also invested $1 million in Relume in 2009.
Then this past December, Beringea helped Relume raise $4 million in an internal round of investments, largely from existing individual shareholders but also with Beringea, Plymouth Management and Invest Detroit again participating.
Lipsey said having trusted insiders work the investment field freed management to concentrate on running the company.
“That was a big deal for us. It allowed me and my team to not worry about going out and getting more money,” he said.
Relume is using the funding to expand its sales and marketing team and to invest in proprietary technology, such as lighting controls technology that requires levels of investment that many small companies can’t or won’t spend, Lipsey said.
Examples of the technology Relume is developing include remote energy consumption controls that allow customers, from an office computer, to dim the lights during hours of low traffic and monitor energy use.
The company has had several new opportunities come about recently that could prompt another search for funding.
“We might be entertaining another round of funding later this year,” Lipsey said.
March 10, 2013 | Crain’s Detroit Business – New Michigan Deal Supplement