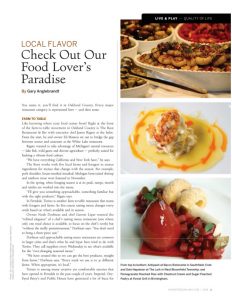 The Oakland County restaurant scene is a comprehensive one, representing every major category of eatery.

That holds true for one of the categories increasingly sought-after by food enthusiasts who like their food to be sourced locally. Right at the front of the farm-to-table movement locally is The Root Restaurant & Bar, and at the helm of the kitchen is executive chef James Rigato, who says he and owner Ed Mamou set out to bridge the gap between source and customer. “I’m obligated as a chef to connect my customers to where the food comes from,” Rigato said.

“I want to reward those who make food a priority in their lives. But too my goal is to educate people who don’t know. I don’t want to be a members-only club where only if you know about grass fed beef can you eat here.”

Rigato wanted to take advantage of Michigan’s natural resources — lake fish, wild game and diverse agriculture — that are ripe for backing a vibrant food culture. “We have everything California and New York has; we’re just missing the connecting of the dots,” he said.

The restaurant works with five local farms and foragers to get the ingredients for its seasonal menus that change according to what’s available. Pork shoulder, house-smoked meatloaf, Michigan farm-raised shrimp and rainbow trout were among the “principals,” or main courses, in November. “Michigan is still a blue-collar state so burger and meatloaf will always sell. I’ll give you something approachable, something familiar but with the right products,” Rigato said.

The work of the foragers is especially visible in springtime, when foraging season is at its peak. Ramps, morels and nettles are worked into the menu. “If you’re in tune with foraging you’ll definitely see it at The Root,” Rigato said.

The Root holds monthly themed dinners, such as ones featuring wild game or a “Great Pumpkin Feast” where all the courses contained pumpkin.

Prices range from the teens to $29.

The Root is in White Lake in northwestern Oakland County, purposefully set closer to rural farming areas. But if that’s too off the beaten path, the city of Ferndale might be more convenient, sitting right in the center of metro Detroit.

That’s where Torino can be found, another farm-to-table restaurant that works with foragers and local farms, and where careful selection of all ingredients is paramount. The five-course tasting menu changes every week based on what’s available and in-season. The standard price is $59 with an optional $30 drink pairing.

Owner Noah Dorfman and chef Garrett Lipar wanted the “refined elegance” of a chef’s tasting menu restaurant (one where only one meal choice is available to focus on the chef’s work) but “without the stuffy pretentiousness,” says owner Noah Dorfman. “You don’t need to bring a three-piece suit.”

Dorfman said approachable tasting menu restaurants are common in larger cities and that’s what he and Lipar have tried to bring to do with Torino.

Calls to suppliers are placed every Wednesday to see what’s available for the “ever-changing seasonal menu.”

“We have created this so we can get the best products, straight from farms. We don’t solely deal with Michigan, but we get a lot of wild foraged produce in Michigan,” Dorfman said.

“Every week we use 10 to 30 different farms. When appropriate, it’s local. Our theory is it’s more about the ethics, not the miles.”

Torino is among many creative but comfortable eateries that have opened in Ferndale in the past year or two years. Imperial, One-Eyed Betty’s and Public House have generated a lot of chatter for their fun atmospheres — they’re as much bars as restaurants — and inexpensive but thoughtful menus.

But sometimes a steakhouse what’s needed, the classic restaurant choice for business-related wining and dining.

Morton’s the Steakhouse in Troy and The Capital Grille are usually the first ones mentioned in that crowd. Other members in good standing are Clawson Steak House (Clawson), Ruth’s Chris Steak House (Troy), Ocean Prime (Troy), Prime29 (West Bloomfield) and Novi Chophouse (Novi).

Or just head to Birmingham, where there’s at least five steakhouses, most of them within walking distance of each other.

Walkable, upscale downtown Birmingham also is home to many bistros. Bistro Joe’s, managed by Michelin-rated chef Jacques Van Staden, is situated inside Papa Joe’s Gourmet Market to show off what the store’s products, as well as those of local farmers, can do while keeping dinner prices under $30.

Forest Grill, featuring the work of veteran chef, food instructor and charcuterie expert Brian Polcyn, also keeps the price at about $30 or under amid upscale but comfortable surroundings.

And that still leaves about a dozen other bistros to choose from in the city.

If impressing clients is the goal, or simply some top-notch fine-dining, Bacco Ristorante in Southfield should be on the short list of destinations. Celebrities make appearances there, and President Barack Obama had a private dinner there last year.

The restaurant has at least four seasonal menu changes a year and prices top out at $49.

Also in Southfield is Gastronomy, for serious enthusiasts of the craft of cooking and presentation. Most dinners are in the $25-$45 range.

Now, when it comes to hidden gems that only locals know about, it’s all about Asian hideaways.

One of the most fun local food adventures a person can have is to take a cruise on a humble stretch of John R Road through Madison Heights and Hazel Park. Placed in the many small, aging strip malls is a  surprising number of low-key Vietnamese, Korean and Thai restaurants, a trove for any lover of Asian food.

Another secret, jealously guarded by dedicated guests, is Noble Fish in Clawson. It contains just a handful of seats, crammed in the back near the counter, as this is actually a Japanese grocery store that happens to have a small bit of restaurant service, not a full-blown eatery.

Without being told, a person would pass by never knowing it’s possible to go inside and sit down for a meal. But local sushi lovers, not to mention some of the chefs mentioned here, swear by it.