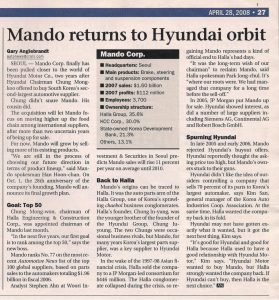 The acquisition will let Mando focus on moving higher up the food chain among international suppliers, after more than two uncertain years of being up for sale.

For now, Mando will grow by selling more of its existing products.

“We are still in the process of choosing our future direction in terms of product lineup,” said Mando spokesman Han Hoon-chan. On Oct. 1, the 28th anniversary of the company’s founding, Mando will announce its final growth plan.

“In the next five years, our first goal is to rank among the top 50,” says the new boss.

Mando ranks No. 77 on the most recent Automotive News list of the top 100 global suppliers, based on parts sales to the automakers totaling $1.96 billion in fiscal 2006.

Analyst Stephen Ahn at Woori Investment & Securities in Seoul predicts Mando sales will rise 11 percent per year on average until 2010.

Mando’s origins can be traced to Halla. It was the auto parts arm of the Halla Group, one of Korea’s sprawling chaebol business conglomerates. Halla’s founder, Chung In-yung, was the younger brother of the founder of the Hyundai Group, Chung Ju-young. The two Chungs were occasional business rivals, but Mando, for many years Korea’s largest parts supplier, was a key supplier to Hyundai Motor.

In the wake of the 1997-98 Asian financial crisis, Halla sold the company to a JP Morgan-led consortium for $446 million. The Halla conglomerate collapsed during the crisis, so regaining Mando represents a kind of official end to Halla’s bad days.

“It was the long-term wish of our chairman” to reclaim Mando, said Halla spokesman Park Jong-chul. It’s “where our roots were. We had managed that company for a long time before the sell-off.”

In 2005, JP Morgan put Mando up for sale. Hyundai showed interest, as did a number of large suppliers including Siemens AG, Continental AG and Robert Bosch GmbH.

Hyundai didn’t like the idea of outsiders controlling a company that sells 70 percent of its parts to Korea’s largest automaker, says Kim San, general manager of the Korea Auto Industries Coop. Association. At the same time, Halla wanted the company back in its fold.

Hyundai may not have gotten exactly what it wanted, but it got the next best thing, Kim says.

“It’s good for Hyundai and good for Halla because Halla used to have a good relationship with Hyundai Motor,” Kim says. “Hyundai Motor wanted to buy Mando, but Halla strongly wanted the company back. If Hyundai can’t buy, then Halla is the next choice.”