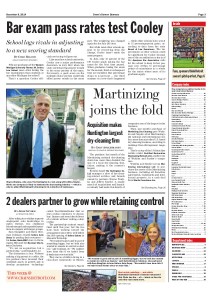 The purchase last month of the Martinizing national dry-cleaning chain has more than doubled the size of a local dry-cleaning franchisor, making it the country’s largest.

Berkley-based The Huntington Co. LLC manages a slew of dry-cleaning-related entities and brands owned by partners Wayne Wudyka and Jeffrey Snyder. A steady march of acquisitions and launches already had made this family of companies one of the largest in the business.

Then, last month’s purchase of Martinizing Dry Cleaning gave Wudyka and Snyder all of Martinizing’s 422 national and international outlets, more than any other U.S.-based dry-cleaning business, according to rankings from Entrepreneur magazine.

That’s on top of the 154 franchise outlets under Certified Restoration Drycleaning Network LLC, another one of Wudyka and Snyder’s companies.

Wudyka and Snyder set up Martinizing International LLC to purchase the assets of the Martinizing business, including all franchise agreements, trademarks and intellectual property, in a cash deal from Martin Franchises Inc.

Huntington would not disclose the sale price other than to say it was less than $10 million. Wudyka said it was less than a private equity buyer would have paid, but that “culture was more important than money” to the sellers.

The Martinizing name will remain and the business, founded in 1949, will continue to be based in Milford, Ohio, until its office lease runs out in a few years, after which the headquarters will become part of Huntington operations in Berkley. President Kevin Kaeding and the existing Martinizing staff will continue to run the company, Wudyka said.

Martinizing outlets are spread across the country, and Michigan’s roughly 20 outlets put it among the bigger markets. Huntington also was attracted to Martinizing’s eight international outlets and the possibility of growing globally.

Following Martinizing in the Entrepreneur listing of dry-cleaning franchises is Miami-based Dryclean USA, which has 389 outlets, and Arlington, Texas-based Comet Cleaners Franchise Group LLC, at 210 outlets. Huntington’s Certified Restoration Drycleaning Network, or CRDN, holds the No. 4 slot with its 154.

Wudyka sees the industry as ripe for a company to dominate at a national level and sees his collection of companies as the way to become that dominant player.

Huntington gets its name from the original dry-cleaning shop at the core of the enterprise, Huntington Cleaners Inc., which opened in Huntington Woods in 1950. Wudyka and Snyder bought it in 1992 for $265,000.They have added several business lines since. The biggest one is CRDN, a franchise operation specializing in cleaning textiles damaged in fires, floods and the like. CRDN gets paid by insurance companies for restoring clothes, drapes, area rugs, teddy bears and linens.

Wudyka and Snyder also own Wesch Cleaners in Birmingham and Huntington Window Fashions in Troy, and the Martinizing acquisition came with Dry Cleaning Station, a small franchise business of 12 outlets based in Columbus, Ohio.

In 2013, Wudyka and Snyder launched bizzie, now called bizziebox, a pickup and delivery service that uses lockers placed in apartment and office buildings. Customers use PINs to drop off clothes in the lockers and later to pick them up.

In early 2013 when bizziebox was launching, Wudyka hoped to have up to 100 franchises by year’s end. There’s only about 25 now.

Acquisitions made around the same time as the bizziebox launch slowed down the rollout, Wudyka said. And, as Crain’s reported last year, Huntington originally planned to fold 1-800-DryClean into bizziebox. But it has since decided to keep it separate.

Wudyka said bizzieboxes are now in more than 750 buildings in the country, and about 60 of those buildings are in Southeast Michigan.

Huntington takes what Wudyka calls an “inside-out” approach to franchising, offering existing dry-cleaning shop owners franchise services to add to their offerings. So a given dry-cleaning shop also can run a CRDN textile restoration business and a bizziebox pickup and delivery business from the same shop. None of the Huntington franchises has any corporate outlets, so these franchises always are sold to separate franchisees.

Wudyka and Snyder see this approach as their ticket to national growth and had it in mind when they bought Martinizing. “Every Martinizing in the country should have bizzie lockers,” Wudyka said.

“1-800-DryClean and Pressed 4 Time can and will use Martinizing to do their cleaning services. There will be opportunities for Martinizing operators to acquire those routes and fold them in, or vice versa.”

The combined direct revenue for all of the brands and entities was about $19 million last year, said Wudyka, who expects this year’s total to come in at $21 million. The companies directly employ 200 people. Systemwide, the companies had revenue of $125 million last year, employing between 4,000 and 5,000 people, and are on pace to surpass $160 million this year.The Martinizing buyout should add at least $30 million in revenue systemwide, but Wudyka was unsure because Huntington is still sifting through the franchise agreements.

The national presence, combined with the tangled nest of brands, might make some companies eager to form an overarching brand, but Huntington’s not ready for that just yet.

“I won’t say we plan to merge them all together. Each business has its own definite franchisees and strengths,” Wudyka said. “That’s not to say it couldn’t happen, but it might panic the other franchisees and brands.”

The international foothold that came with Martinizing will be one area of focus in the future. The company also wants to take advantage of mobile technologies. Bizziebox and CRDN already have apps, and Wudyka plans to invest more in technology.

In the meantime, the plan is to improve communications with franchisees, support the brands and add more stores.

The dry-cleaning industry has seen “ebbs and flows” of consolidation in the past, including one sparked by 1-800-DryClean, but none has stuck, said Kevin Dubois, CEO of Lapels Dry Cleaning, based in Hanover, Mass.Most dry cleaners are family-owned and have been for a long time. They run their businesses well and keep their profits secret.

Lapels has 63 outlets, about half of which are in Massachusetts, and in the past six months it has signed agreements to open 70 more. The company expects to open up to 500 outlets in the next five years, and Michigan is in its sights. It plans to open 16 outlets in Southeast Michigan beginning next year, having announced an agreement with a local Great Clips hair salons franchisee last month.

The push into Michigan will begin with the opening of a central dry-cleaning plant in West Bloomfield Township in spring, followed by two outlets later in the year, probably in Bloomfield Hills and Troy or Rochester Hills. It chose the Canton-Rochester Hills arc after studying the demographics.

“All those ZIP codes are great dry-cleaning customers,” Dubois said.

The sort of large, polished storefronts expected of national brands don’t fit well with dry cleaning operations, either. They require lots of investment, which then requires drawing customers from a wide geography. This doesn’t jibe with a business where convenience is king. Dry-cleaning customers come from a tight three-mile radius around the storefronts, Dubois said.

“There are only so many dry-cleaning dollars in a ZIP code,” he said. “The No. 1 decider is convenience. That’s ultimately the way this industry gets consolidation.”

Any would-be consolidator will have to have good customer service, clean shops and a continuing neighborhood feel, he said. Huntington has a good shot at accomplishing this, but, apart from the industry’s general resistance to consolidation, it will have a difficult time untangling exclusive territory rights, Dubois said. For example, Martinizing franchisee rights could clash with the rights of CRDN franchisees operating in the same market.

“You have to be a good psychologist to make that work,” Dubois said.

In 1992, Wayne Wudyka and Jeff Snyder bought Huntington Cleaners, a retail dry-cleaning shop in Huntington Woods that opened its doors in 1950. Since then, they have added an ever-growing collection of dry-cleaning businesses to their holdings, which are managed by another of their companies, The Huntington Co. LLC in Berkley.

What it does: Pickup and delivery service using lockers in office and residential buildings

What it does: Pickup and delivery service, mainly for residential customers

What it does: Pickup and delivery service, mainly for office customers

What it does: Traditional retail dry-cleaning service

What it does: Traditional retail dry-cleaning service

What it does: Restoration of textiles damaged in fires, floods and other disasters

What it does: Stand-alone shop in Birmingham offering high-end dry-cleaning service

What it does: Sales and cleaning of custom window treatments, shutters and drapes. Based in the Michigan Design Center in Troy.