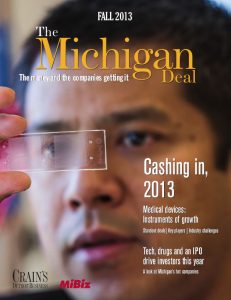 But the assets show a different story: As many as 50 new companies, a short but sound list of exits, several major companies, a strong base of research universities and hospitals, low costs, a long manufacturing history and a pool of experienced managers and investors.

Michigan’s medical device industry now has a base from which inventors, entrepreneurs and investors can take advantage of an ever-growing health care industry and its demands for technology and cost savings.

“It’s just going to explode,” Kalyan Handique, the founder of an Ann Arbor-based medical device company, HandyLab Inc., which turned into one of the state’s biggest venture capital successes, said on the outlook for the state’s medical device industry.

“We’re at the beginning of a critical mass,” said Christine Gibbons, president and COO of HistoSonics Inc., a startup in Ann Arbor.

However, Michigan is not exempt from the same problem that plagues the rest of the nation’s medical device industry: a sharp investor pullback in the face of regulatory uncertainty and more stringent reimbursement guidelines.

Although a pool of talent exists for managers, it’s still a small pool.

And despite the long history of manufacturing, finding companies nearby that can handle the demands of the medical device industry isn’t always easy.

Still, the push for increases in efficiency and economy in health care means medical devices will be a growing industry for years to come.

“There will be demand there, and it seems to me that it’s a field Michigan should be paying attention to. We have the schools and hospitals,” said David Brophy, director of the Center for Venture Capital and Private Equity at the University of Michigan and founder of the Michigan Growth Capital Symposium.

People in the industry estimate 40-50 startups have appeared in the past five years.

“Once upon a time, that IP might have left the state, the talent might have left, and they’re staying here,” said Stephen Rapundalo, president and CEO of MichBio, a trade association based in Ann Arbor.

The economic downturn and Pfizer Inc.’s large downsizings over the past decade in Kalamazoo also have been at the source of the startup bloom, as people looked for ways to keep themselves working, said Kevin McLeod, managing director of the Michigan Medical Device Accelerator in Kalamazoo.

Health systems are part of the mix, too, opening innovation centers — in effect their own tech transfer offices — to stream patents and commercialization out of hospitals.

Royal Oak-based Beaumont Health System is the “granddaddy of them all,” Rapundalo said, having opened one 10 years ago. Others such as Spectrum Health System in Grand Rapids and Detroit-based Henry Ford Health System have followed suit.

“Historically, like with (Marquette-based) Pioneer (Surgical Technology Inc.), a surgeon who needed an instrument had nowhere to turn and bootstrapped it,” he said.

Plymouth-based Delphinus Medical Technologies Inc., spun out of the Barbara Ann Karmanos Cancer Institute in Detroit, is one example.

“They’re investing in startups at a level where typically startups can’t find money — $50,000 to $200,000 to get the IP or a prototype to the point where they can raise real money,” DeVries said.

“That seed capital has been tremendous for our state.”

Michigan isn’t alone in the region.

In the medical device category, Michigan ranked fifth in dollars raised at $16.7 million. Leading was Minnesota at $112.3 million, followed by Ohio at $93 million.

There are encouraging precedents for Michigan’s startups. Investor successes Accuri Cytometers Inc. in Ann Arbor and HandyLab, both of which were University of Michigan spinoffs that saw big exits, have set encouraging recent precedents for new startups. New Jersey-based medical device supplier Becton, Dickinson and Co. bought Accuri in 2011 for $205 million and HandyLab in 2009 for $275 million.

In the state’s Upper Peninsula, Pioneer Surgical Technology was sold last summer to a Florida company for $130 million, after starting in 1992 as a guy with an idea in a garage.

The roots go back further, to companies like DLP Inc., a Grand Rapids maker of cardiac surgery products sold to Minneapolis-based Medtronic Inc. in 1994 for $128 million. Ron Williams, the man who founded the company in 1980 and led it through the sale, is still active today in his 70s in the role of chairman at his son’s medical device contract manufacturing company, Grand Rapids-based Medbio Inc., specializing in injection molding.

And of course, there’s Stryker Corp., the Kalamazoo-based medical device giant founded in 1941 that now has a $25 billion market capitalization.

An ecosystem of lawyers, consultants, investors and insurers to support entrepreneurs now exists, a luxury not afforded past startups.

“All those things exist here now. It’s easier now to find someone to answer a regulatory question than 10 or 20 years ago,” said Scott Merz, president of Michigan Critical Care Consultants Inc., known as MC3, in Ann Arbor, which manufacturers medical device products, does prototyping and product development for startups, and houses two medical device startups at its accelerator.

The low cost of doing business, relative to hotspots on the coasts like San Diego, Palo Alto and Cambridge, is another benefit for Michigan startups.

“Being in a flyover state, the rent to launch a company is a fraction of the cost,” said Phillip Torrence, managing partner at Detroit-based law firm Honigman Miller Schwartz and Cohn LLP. “Going forward, it could really be a factor in launching and growing companies.”

Work is also being done to organize the industry.

The consortium hired the Institute for Research on Labor, Employment, and the Economy at the University of Michigan to do an inventory of the state’s medical device industry, “from entrepreneurs through the Strykers and all the companies that serve them,” said McLeod, head of the accelerator.

The Michigan Economic Development Corp. pitched in $75,000 in matching funds for the project. The results are expected to come out by the end of the year.

The accelerator, supported by the budget of Southwest Michigan First, manages a portfolio of four medical companies. Originally, its mission was to fund startups, but McLeod said it soon became clear that companies needed help commercializing their products as much as they needed money.

The consortium will connect startups with lawyers, manufacturers, consultants and other in-state industry resources, and then begin marketing the industry.

“I don’t want to hear about them going outside the state for help when they can get it right here,” McLeod said.

Attracting companies and talent is another goal. McLeod, who spent 17 years at Stryker in marketing and business development, said he has friends who wanted to get involved in a startup venture but had to leave the state to do it.

“We need to create an environment where mid- to higher-level executives who won’t be running the Strykers of the world want to stay in Michigan,” he said.

Merz at MC3 would be one to welcome results of the consortium’s work. Michigan gets overlooked in the national scene and should get more attention, he said.

“It can’t happen overnight,” he said. “You can’t just go and build another Minneapolis.”