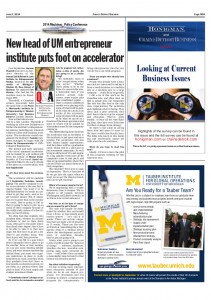 Last September, Stewart Thornhill took over as executive director of the Samuel Zell & Robert H. Lurie Institute for Entrepreneurial Studies, housed at the University of Michigan‘s Stephen M. Ross School of Business. He replaced Tom Kinnear, who had led the institute since its founding in 1999.

Now settled into his new role in a new country, Thornhill is working on a few new initiatives to further the institute’s entrepreneurial mission, including one to launch a Silicon Valley-style business accelerator. The accelerator would complement the institute’s TechArb incubator, managed in league with the Center for Entrepreneurship at UM’s College of Engineering.

The launch and early operation of the as-yet unnamed accelerator will be funded by a $1 million gift from the family of Bharat Desai, founder of Troy-based Syntel Inc. Thornhill filled in the early details of the plans in a conversation with Gary Anglebrandt.

Let’s hear more about the accelerator.

The accelerator will be modeled on Y Combinator, Techstars, Launchpad LA. The perfect company to enter an accelerator is the one that is quarter-baked. You want it to be half-baked before it’s really in a position to get that early, seed or angel investor money. But if companies try to go for that early investor too early, they’re going to fail or they’re going to have to give up so much of their company because of the wildly risky nature of it that it’s often not worth doing.

We often find that students who incubate ideas, whether in a formal incubator or just in their dorm room, often get to the point where they finish their degree, they’d love to be able to take it to that next stage, but they have to go get a job. They’ve got student loans, they have to pay rent, buy groceries.

So if we can fill in a gap where those companies have a place to go for another three or four months, we can put some funding behind them, put some intense mentorship behind them, put some very rigorous milestones in place to really keep them on track. And then when they graduate from that three- or four-month acceleration period, we put them in a position where they pitch to local VCs, local angels and student investment funds.

Y Combinator doesn’t charge an upfront cash fee for companies accepted into its program but, rather, takes a slice of equity. Are you going to do a similar thing?

The differentiating factor between the accelerator and an incubator is the incubator is just space and mentorship. The accelerator will also have money higher expectations. And then there will be a graduation event, which will be a pitch day to the investment community. So we’ll bring in all the local VCs and angels; do a big, splashy event; have all the companies come in and pitch; and then set up opportunities where they can see if they can attract interest in their companies.

The timeline? We’d love to open in September. That’s a function of do we get into the space when we want, do we get the director hired, and can we get running?

Where’s the space expected to be?

We’re negotiating with a vendor downtown, close to campus. The incubator is off campus, between Washington and Liberty (streets), so we’d love to be in that same area.

Any idea as to the type of companies you expect to put in there?

The type will largely be determined by whether they can benefit from a three- or four-month acceleration period — let’s call it 15 weeks. There are certain companies that can make a lot of progress in 15 weeks. Those are the ones we’ll look at. Something like a therapeutic drug or a medical device where the development period is years or sometimes decades, they’re just not going to fit.

Likely what you’re going to see is lots of stuff around the “Internet of things” — software, hardware, interface devices, wearable computing, apps, some consumer devices — stuff where they can make a meaningful leap forward in that intense acceleration period.

Any other initiatives happening?

I’d like to bring more entrepreneur education outside of just what we do in our degree programs. I’ve developed, and I’m working to launch, a high-growth program for entrepreneurs — bring entrepreneurs into the university for a one-week program.

These are people who already have a business?

People who already have a business and are interested in taking it from a small business to a medium size or a medium size to a large company — really focus on growth.

I did a lot of this work on the Canadian side, and often what we find is people who run companies like this feel like they’re the only ones experiencing the problems and challenges they’re facing. They often lack a peer network; they don’t know where to go for support and education. They’re, quite frankly, so busy all the time fighting fires, they have very little time to reflect on longer-term strategy.

So there’s real value in giving them time and space to come in. We have world-class faculty here. The folks who teach in this building just continually amaze me with what they do and know.

When do you hope to start this here?

Ideally, I’d love to have the pilot of this program running by this time next year.