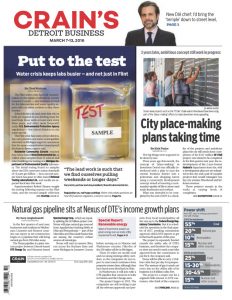 In the first quarter of next year, businesses and residents in Washtenaw, Lenawee and Monroe counties can expect to see construction begin on a pipeline that will bring natural gas from 250 miles away.

The Nexus pipeline is a joint-venture project between Detroit-based DTE Energy Co. and Houston-based Spectra Energy Corp., which are equally splitting the $2 billion project cost. Nexus will pipe natural gas sourced from Appalachian fracking fields in Ohio and Pennsylvania — part of the Marcellus and Utica shale basins that are among the country’s richest sources of natural gas.

Nexus will start in eastern Ohio, run across the Buckeye State and enter Michigan in Lenawee County before moving on to Monroe and Washtenaw counties. Fifty-five of the 250 miles will be in Michigan.

Those 55 miles are mostly rural and run along existing utility corridors, so the companies do not expect to meet much resistance from property owners here, although they have faced some blowback in Ohio.

In Washtenaw, it will join with a DTE pipeline that connects to hubs in Ontario and the Chicago area.

The project began in 2013. The companies are still working to get all the relevant approvals and permits from local municipalities all the way up to the Federal Energy Regulatory Commission. But it is scheduled for operation in the final quarter of 2017, pending commission approval, which DTE expects to get in the fourth quarter of this year.

The project is separately funded outside the utility side of DTE’s business, and therefore the company does not need to seek a rate hike approval from the commission to pay for it, the company said.

The project is a major one for a segment little known to DTE customers, who think of the company merely as a predictable provider of monthly utility bills. The Gas Storage & Pipelines division stands apart from the utility business and was the company’s best-performing division last year. Its profits increased 30 percent from $82 million in 2014 to $107 million in 2015. Other divisions were flat, down or lost money.

Fitch Ratings, in a February upgrading of DTE’s credit rating, approvingly noted that Nexus is buoyed by “take-or-pay contracts” with distributors with an average term of 15 years. These contracts are exactly what they sound like: Customers that choose not to take gas from the pipe will still have to pay for it. They can sell their share on the secondary market. Either way, Nexus gets the important early funding it needs to make the project viable, upfront.

GS&P is one of two non-utility business divisions that could drive up DTE’s net income 25 percent by 2018, the ratings company projected. (The other is DTE’s Power & Industrial Projects division, which manages power at factories for industrial customers.)

DTE plans to spend up to $2.6 billion developing its gas and pipelines business through 2020.

GS&P’s customers are utilities, including DTE itself. The division supplies fuel through pipelines and uses underground storage facilities, many of them in St. Clair County, to make sure it has the supply needed at times of peak demand.

Nexus will allow DTE to expand the gas side of its business. The company says Michigan’s geography gives it an edge. Natural gas wells made of porous rock were depleted in the middle of the last century but now serve as ideal places to store gas. DTE’s strategic play is to combine this natural storage asset with a direct line to one of the country’s biggest hotbeds of natural gas production.

DTE says it already has contracts with seven companies for two-thirds of the pipeline’s capacity. They include Union Gas Ltd., Enbridge Inc., Chesapeake Energy Corp. and Noble Energy Inc.

Markets directly served will be those in northern Ohio and Southeast Michigan. The reach will be extended by connecting to another DTE joint-venture pipeline called Vector, which runs 348 miles between the Chicago area and Dawn, Ontario, which is a major energy hub.

A map provided by DTE shows a string of northern Ohio gas utilities and industrial parks along the Nexus route that would be welcome new customers. These include Columbia Gas of Ohio Inc., Dominion Resources Inc. and a gas plant being built near Toledo called the Oregon Clean Energy Center.

DTE would not say how much revenue it expects from the expansion.

But, like Michigan, Ohio has aging coal plants that likely will be replaced by natural gas.

“Ohio has the same situation we do,” said David Slater, president of DTE’s gas and pipeline division.

Besides adding a major asset to its GS&P division, not to mention to its regular gas utility business, Nexus also fits into a shift that will remake DTE’s electric utility infrastructure over the next 15 years.

DTE is in the early stages of switching this base from coal to natural gas. It expects gas to generate 30-45 percent of its mix by 2030.

The overhaul serves not only to upgrade the aging fleet, but also to meet the U.S. Environmental Protection Agency’s proposed Clean Power Plan to cut carbon emissions 32 percent by 2030. (DTE’s fellow Michigan utility, Jackson-based Consumers Energy Co., has similar plans. Three of its five coal plants will close in April.)

DTE last year spent $310 million on purchases of two natural gas plants. It’s in the middle of shutting down two-thirds of its coal plant in Trenton. It hasn’t announced plans to close units at any of its four other coal plants, but it will have to in the years ahead to meet its targets.

It expects to spend $1.2 billion on new electricity generation by 2020. DTE CEO Gerry Anderson previously told Crain’s that the bulk of the spending to replace coal will begin after that, with DTE’s bill eventually coming in at $8 billion.

Officials at DTE and Consumers say they will lean toward natural gas because renewable energy technology hasn’t advanced enough to depend on for base load energy. Gas is cleaner than other fossil fuels and will allow them to meet federal emissions rules. Since gas doesn’t rely on the vagaries of wind and sunshine to produce power, it can be the base that enables the expansion of renewables.

They also like that natural gas plants are smaller and nimbler than coal plants. They require less investment, take up less real estate, can be built within two years, and are easily switched on and off.

Industry watchers worry the utilities are setting up themselves, and by extension the state’s economy, for disaster should the price of natural gas spike.

Price spikes have caused problems in the past. In the early 2000s, low prices enticed independent investors to build plants. Prices went back up and these “merchant plants,” as they are called, went bust. (Now they are easy pickings for the utilities. Consumers Energy last year bought one for what it says was the quarter of the price to build one.)

“There’s no way natural gas is going to stay as cheap as it has been for the last couple of years,” said Martin Kushler, a senior fellow at the California-based American Council for an Energy-Efficient Economy whose office is in Lansing.

The revolution in fracking technology that’s been going on for the past decade has been the leading the plunge in prices. That technology won’t be un-invented. But Kushler said that may be beside the point; when fracking depletes existing reserves, prices will reflect the tightened supply.

At the moment, DTE is busier fending off price questions coming from the other direction. In the Feb. 10 conference call, analysts were more concerned that prices are so low that drillers won’t have anything to put into the Nexus pipeline. Prices don’t make it worth the money it takes to get gas out of the ground.

Anderson said not to worry.

“The drilling has to resume, and our pipes are in the right locations to benefit and grow.”

How DTE said its energy generation mix will change.