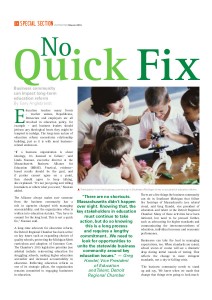 Education touches many fronts – teacher unions, Republicans, Democrats and employers are all involved in education policy, for example – and business leaders should jettison any ideological bents they might be tempted to indulge. The long-term nature of education reform necessitates relationship building, just as it is with most business-related endeavors.

“If a business organization is about ideology, it’s doomed to failure,” said Linda Noonan, executive director at the Massachusetts Business Alliance for Education (MBAE). Practical, evidence-based results should be the goal, and if parties cannot agree on a point, they should agree to keep talking, she explained. “It’s not just going and telling lawmakers or others what you want,” Noonan added.

The Alliance always makes sure someone from the business community has a role in agencies charged with managing accountability, and the organization often is written into education statutes.

“You have to commit for the long haul. This is not a quick fix,” Noonan said.

A long-time advocate for education reform, the Detroit Regional Chamber has been active on key issues such as expanding choices of quality schools, protecting the Michigan Merit curriculum and adoption of Common Core.
The Chamber’s 2015 legislative priorities (see below) include: reinventing education for struggling schools, making higher education accessible and increased accountability in education. Reflecting education reform as one of its strategic pillars, the organization remains committed to engaging businesses in education.

There are a few things the business community can do in Southeast Michigan that follow the footsteps of Massachusetts said Greg Handel, vice president of education and talent at the Detroit Regional Chamber. Many of these activities have been initiated, but need to be pressed further, such as advocating for higher standards and communicating the interconnectedness of education, individual incomes and economic performance.

Businesses can take the lead in managing expectations, too. When standards are raised, school scores of course will see a dramatic drop during initial rounds of testing. That reflects the change to more stringent standards, not a sky-is-falling crisis.

“The business community needs to stand up and say, ‘We knew when we made that change that things were going to look much worse. Everybody needs to stay calm. It’s not worse, we’re just measuring more accurately,’” Handel said.

It took Massachusetts about 10 years before it started separating from the rest of the country, Handel said.

“There are no shortcuts,” he added. “Massachusetts didn’t happen overnight. Knowing that, the key stakeholders in education must continue to take action, but do so knowing this is a long process and requires a lengthy commitment.”

The Chamber is developing a new set of basic principles for advocating educational policy in Lansing and coordinating with other businesses to that end, Handel said. Those principles are not yet finalized. Michigan has no corollary to the MBAE, but some collaborations in this area have already been done by the Chamber, the Grand Rapids Chamber and Business Leaders for Michigan.

The groups worked together to support Common Core in Michigan, for example, but there is no formal alliance.

“We need to look for opportunities to unite the statewide business community around key education issues,” Handel said.

Reinvention of Education for Struggling Schools
The Chamber continues to engage the education community regarding alternative solutions for improving chronically underperforming schools. The Chamber has supported the Education Achievement Authority to capture low-performing schools and allow greater flexibility in transforming the schools, including creating and converting charter schools. In the past, the Chamber supported efforts to codify this agreement in law.

Lowering costs for students to increase accessibility to higher education is critical to a highly educated workforce. The Chamber will join partners in supporting increased appropriations for universities and community colleges. Best practices indicate that higher education costs should be met with two-thirds from state appropriations and one-third from tuition and fees. This should be the Legislature’s long-term goal. The Chamber will also support administrative reforms to increase efficiency in higher education.

The Chamber will continue efforts that increase accountability and transparency in education, including advocating for an assessment tied to Common Core curriculum standards, transparent and user-friendly school rating tools, and high reading standards in early education.