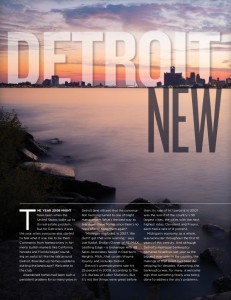 The year 2008 might have been when the United States woke up to its real estate problem, but for Detroiters it was the year when everyone else started to feel what it was like to be them. Comments from homeowners in formerly bullish markets like California, Nevada and Florida began sounding an awful lot like the talk around Detroit. Boarded-up homes suddenly dotting the landscape? Welcome to the club.

Abandoned homes had been such a persistent problem for so many years in Detroit (and still are) that the conversation had long turned to one of blight management: What’s the best way to tear down these homes since there’s no hope of ever filling them again?

“Michigan imploded in 2007. We didn’t get that slow warning,” says Joe Kadaf, Broker/Owner of RE/MAX Leading Edge – a brokerage with 48 Sales Associates based in Dearborn Heights, Mich., that covers Wayne County and includes Detroit.

Detroit’s unemployment rate hit 25 percent in 2009, according to the U.S. Bureau of Labor Statistics. But it’s not like things were great before then. Its rate of 14.1 percent in 2007 was the worst of the country’s 50 largest cities; the cities with the next highest rates, Cleveland and Fresno, each had a rate of 8 percent.

Michigan’s economy, as a whole, was lackluster throughout the first 10 years of this century. And although Detroit’s municipal bankruptcy garnered headlines last year as the biggest ever seen in the country, the makings of that event had been developing for decades. If anything, the bankruptcy was, for many, a welcome sign that something finally was being done to address the city’s problems.

While the subprime mortgage crisis set other markets on fire, it was like adding accelerant to an already burning one in the Detroit area.

“Southeast Michigan was the first to be obliterated. California and Florida were hit hard, but nobody got hit like Michigan,” says Kadaf, a Lifetime Achievement Award recipient who’s sold more than 10,000 properties since starting his career in 1998.

DIGGING IN TO DO THE WORK
Another one of the city’s characteristics that’s picked up national headlines is its entrepreneurial spirit. People who see opportunity in the once-in-a-generation conditions roll up their sleeves and think creatively, which is exactly what Kadaf has done.

In fact, he purposely opened his RE/MAX franchise in the middle of 2008 to take advantage of the unusual market conditions as others fled the area.

RE/MAX Leading Edge took an entirely different view of the market and how to approach it. Instead of the traditional model of gathering homes and listing them, it targeted three types of buyers: investors, such as managers of real estate investment trusts; retirees looking for rental income; and first-time buyers willing to invest money and labor into their homes.

Kadaf adjusted his sales pitch, pointing out that it isn’t every day that someone can buy a pre-war brick home for the same price as when it was built. At one point in the downturn, these homes were going for as little as $15,000 to $25,000.

“We weren’t so much selling properties as selling an idea: Invest in real estate,” Kadaf says. “We knew that once the city rebounded and people saw the great value of living here, they were going to come back.”

But it meant working harder for tighter margins. The average commission fell 75 percent from pre-crisis levels.

“In some areas of the country, agent commissions are more than my average sales price,” Kadaf says.

So the brokerage relied on volume. RE/MAX Leading Edge matched buyers with inventory sitting on the books of banks, credit unions and the U.S. Department of Housing and Urban Development – “whoever had property to sell,” Kadaf says.

“Remember, this was new to those sellers. They hadn’t seen this dramatic increase in inventory before.”

It took some adjusting on the part of agents, too. They could no longer work on a handful of transactions at a time. They had to move inventory.

“They went from showing buyers $200,000 homes to talking to investors. They dug in and got their hands dirty,” Kadaf says.

Chunk by chunk, the office chipped away at the glut of properties. RE/MAX Leading Edge has closed more than 16,000 transactions since opening.

The past six years have been difficult and the market isn’t out of the weeds yet, says Sales Associate Jay Shank, who’s had to cut back on advertising spending.

The volume approach has meant “more work for less money,” he says. “But you do what you have to do to get through it.”

A SHIFT IN STRATEGY
Word of Detroit’s unusual housing market spread overseas and buyers became curious about Wayne County. RE/MAX Leading Edge picked up business with international investors, many from China, looking for a piece of the action.

Like other business owners who saw their way through the last seven years in Detroit, Kadaf says it came down to a willingness to work where others wouldn’t bother or dare try.

“Many competitors walked away,” he says. “Nobody wants to drive to tough areas to check on boarded-up homes, with vagrants and drug dealers attempting to take over the neighborhood. But we did it. Five years later people are saying, ‘How did this office sell 16,000 properties?’ That’s how.”

“Before the crash, buyers bought everything at top-market,” Fenech says. “That was the home they planned on living in for years. Now it’s more of a stepping stone to the home they want, and I haven’t seen that since the early ’90s.”

Kadaf tells agents to pay attention to every lead. Too many dismiss a lead too quickly, failing to see the bigger picture. “You never know whether the next call is going to be a million-dollar call, and we’ve had those calls,” he says. “Some people bought 50 properties at once.”

Despite all the city’s been through, Kadaf says what just about everyone in Detroit says: The city’s woes are overblown.

“Nobody dropped an atomic bomb on Detroit,” he says. “It’s still a thriving city. It still has residents and they still need housing.”

Foreclosures are drying up, and buyers and sellers are starting to behave normally again. And now that RE/MAX Leading Edge has weathered the storm, the brokerage is well-positioned with a long list of prospective clients who are ready for the next opportunity.