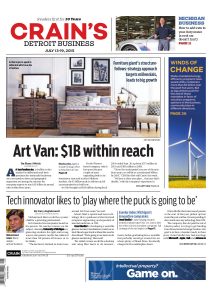 Mohammed Islam could be a poster child for a patenting professional.

He’s founded six companies based on his patents. He teaches courses on the subject, showing University of Michigan engineering students the right and wrong ways to win patents. And he has collected more than 150 patents of his own, or so he thinks.

Islam’s field is optical and laser technology. He is a professor of electrical and computer engineering, and separately of internal medicine, at UM.

Omni MedSci is developing a wearable glucose monitor that diabetics could use to track blood sugar levels without the need to draw blood. “We’re going to use lasers to do glucose monitoring,” Islam said.

The initial version would be a desktop unit using fiber lasers to do the measurements, before graduating into a wearable that would probably go around the ear where plenty of blood flows. Eventually lasers would be replaced with cheaper LEDs.

Omni MedSci had nine issued patents at the start of this year, picked up another four this year and has 15 more pending. It does not license any technology from UM.

The company, thus far paid for out of Islam’s pocket, is trying to get funding from financial and strategic backers. His goal is to have a headset ready in three years. Omni MedSci has had meetings with Microsoft, Apple, Dell and Johnson & Johnson about the product, Islam said.

“The revenue is going to come from the cloud services you provide,” he said.

Telecommunications is another field in which Islam has deep experience. His second company, Xtera Communications Inc., is based on telecommunications backbone technologies using fiber optics. (Islam later sold it but it still carries on, now based in Texas.)

Another of his companies, Cheetah Omni LLC, is a holding company for patents on delivering telecommunications to homes through fiber optic lines.

Another field to add to Islam’s resume is defense. His company Omni Sciences Inc., also based in Dexter Township, has been developing lasers for the U.S. Department of Defense and members of the intelligence community for the past decade.

Recent work has been for the Air Force Research Laboratory, using lasers to identify targets of interest — camouflaged objects, bombs — at a distance. In tests conducted at Wright-Patterson Air Force Base in Ohio, a laser placed in a 12-story tower hits a target a mile away. The light signature that returns is used to determine the chemical composition of the target, thus verifying what it is.

Islam said Omni Sciences also has been doing work at a U.S. Army testing location in Virginia and has a $17 million proposal for work pending at Intelligence Advanced Research Projects Activity to detect explosives at distances.

Omni Sciences licensed some technology from UM; Omni MedSci has not. Some employees are former students.

This is in part because of the years it takes to get a patent through the U.S. Patent and Trademark Office. And most patents are enforceable for only 20 years from the filing date. It’s better to receive a patent at a technological peak than after the wave has crested.

“If you’re going to make a valuable patent, you have to see where it’s going to be 20 years out,” Islam said.

Tip: Besides designing a patent to withstand time (or at least two decades), patent-seekers also should design them to withstand aggressors.

On this, Islam too has experience. Cheetah Omni has sued Fujitsu Network Communications Inc., Cienna Corp., Alcatel-Lucent USA Inc., Huawei Technologies USA Inc. and Nokia Siemens Networks US LLC, all of which settled.

In 2011, Cheetah Omni sued three subsidiaries of Verizon Communications Inc. for patent infringement, and a jury awarded it $5.4 million in damages.

He teaches his students how to write patents to avoid what are called “design-arounds,” where other parties emulate the invention in a way just different enough to avoid infringing a patent.

After describing the patent, “sit back and try to think of every which way people will try to design around you,” Islam said.