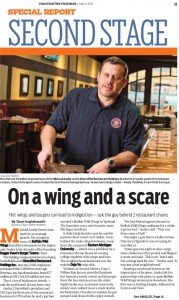 Michael Ansley’s first taste of the restaurant business wasn’t a pleasant one. At his first Buffalo Wild Wings restaurant in Ypsilanti, Workers at General Motors Corp.’s Willow Run factory provided business but formed a rowdy crowd, as did people from the bus station across the street. Fights broke out, customers were surly. Ansley once walked in on a crack deal in his bathroom. On other occasions, he got jumped and chased with a pipe wrench.

“We had federal agents dressed in Buffalo Wild Wings uniforms for a while, it got so bad,” Ansley said. “That was three years of hell.”