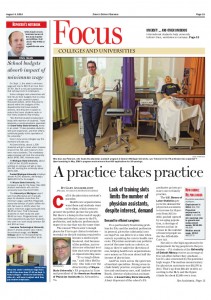 Call it the physician assistant’s paradox.

Health care organizations want them and students want to be them, which seems to present the perfect picture for growth. But there’s a bump in the road of supply and demand when it comes to the PA profession, and industry professionals expect it to stay that way for some time.

The reason? There aren’t enough places for PAs to get clinical rotations — essential on-the-job training required to become a medical professional. And because of the problem, universities are reluctant to either start new programs or expand existing ones.

“It’s a tough dilemma,” said John McGinnity, who took over the directorship of Wayne State University‘s PA program in June and president of the American Academy of Physician Assistants in Alexandria, Va.

It’s a particularly frustrating problem for PAs and the medical profession in general, given the substantial cost savings PAs can deliver at a time when society is pushing for cuts in health care costs. Physician assistants can perform most of the same tasks as a doctor, as long as they’re under the direction of one, helping health care organizations save money as PAs earn about half the income of physicians.

The U.S. Bureau of Labor Statistics projects the demand for physician assistants to increase by 38 percent from 2012 to 2022, pushed upward by an aging population, a shortage of doctors and an increase in the number of insured people under the Affordable Care Act.

Not only is the high opportunity for employment luring people into the profession — PA students at the University of Detroit Mercy receive an average of five job offers before they graduate — but it’s also sweetened by the potential high wages: The median annual salary for physician assistants was $92,970 in 2013. That’s up from $86,410 in 2010, according to the BLS, and the figure climbs by about $2,000 every year.

This has not gone unnoticed by prospective students. When Eastern Michigan University launched its program, it received more than 600 applications for the 20 spots available.

That’s not unusual. The five other schools in Michigan all report receiving hundreds of applications every year for programs that have 40 or 50 openings. Grand Valley receives 350-450 applications for its program of 48 slots; Western Michigan University receives 700 for its 36 to 40 openings and has seen the number spike to as high as 1,200.

The number of PA programs nationally has jumped from about 80 to 187 in the past decade, said Jay Peterson, director of Eastern’s program, launched in May after the school spent $3.6 million on renovations to Rackham Hall, where the program is housed.

“Interest in the PA profession has exploded,” he said.

Some university programs have an “in” at particular health systems.

Beaumont Health System provides slots for clinical rotations with many schools, including Wayne State and Western Michigan, and always has openings for what it calls “midlevel providers,” a category that includes nurse practitioners as well as physician assistants, said Linda Kruso, director of workforce planning.

“Both are vital roles to rounding out the team to ensure we’re able to provide for care,” Kruso said.

Beaumont has openings for 12 to 15 midlevel providers, a typical number at any given moment. An aging society pushes demand for physician assistants and nurse practitioners in two ways, Kruso said. Besides prompting more health care needs as people get older, it also leads to more doctors retiring.

This is creating a big need in primary care as more doctors wind down their practices while freshly minted doctors coming out of school gravitate toward better-paying specialty practices.

“Physician assistants and nurse practitioners are sometimes referred to as ‘physician extenders.’ They are a way of extending access to care through having teams,” Kruso said.

Eastern’s program brings Michigan’s PA program count to six. None of the other schools plans to increase their program size except for Grand Valley, which plans to add a 12-person program to its Traverse City regional center, with an expected opening in fall 2015. Although Grand Valley has increased the number of slots at its main program in Grand Rapids from 30 to 48 since 2007, it has no plans to further increase it.

“The great limiting factor for any PA program is the availability of clinical rotation sites,” Booth said.

That factor has kept Wayne State from increasing the number of students in its program, which is a perennial topic of discussion, said Stephanie Gilkey, who directed Wayne State’s PA program for 10 years until June. The school always is on the lookout for more hospitals and clinics to place students, but that’s just to keep pace with its current number of students.

Because health systems have only so much capacity to take on students, that means PA students end up competing for slots alongside medical students, said Amy Dereczyk, chair of the PA program at University of Detroit Mercy, who is under pressure from the school’s administration to increase enrollment.

“We’d love to increase enrollment. We probably could double it if we could prove we have enough clinical rotations,” Dereczyk said.

Eastern knew it was jumping into an already crowded pool when it opened its program this year. EMU plans to increase its PA program size to 30 students next year and to top it out at 40 the next year, to make sure it doesn’t end up with more students than places to send them for their second-year rotations.

The school also committed $1.1 million toward a new Advanced Medical Simulation Center (finished) and Human Anatomy Cadaver Laboratory (to be opened in May 2015) housed at the nearby St. Joseph Mercy Ann Arbor hospital. The lab and center are meant to give students an advantage when seeking rotations because they’ll have more experience with lifelike situations.

The Accreditation Review Commission on Education for the Physician Assistant Inc. in Johns Creek, Ga., is the accrediting body for university PA programs. There are 64 schools in the country that have applied or indicated they plan to apply for accreditation. No Michigan schools are on the list.

But competition is probably going to increase eventually since the trends pushing demand for PAs show no sign of letting up. Dereczyk expects more Michigan schools to seek accreditation sooner or later.

“You always have rumors, but there’s nothing in the pipeline. The reality is that universities are going to apply for PA programs,” Dereczyk said.

She said Oakland University, which opened a medical school in 2011 and is affiliated with Beaumont, might see opportunity in such a program, and that it’s surprising University of Michigan, a school known for its medical program, doesn’t have one already.

“They have a nurse practitioner program. It’s curious they don’t have a physician assistant program,” Dereczyk said.

The lack of clinical training slots has limited UM’s focus to training advance practice nurses and physicians, according to a statement from UM media relations. OU said it does not have a PA program in the works right now but that it could be something the school looks into in the future.

“A feasibility study was done about adding a PA program and it indicated there was some concern over adequate clinical rotation space. Since then, developing a PA program has moved to the back burner,” said Brian Bierley, OU’s director of media relations, in a statement.

Dereczyk, who is on Eastern’s PA advisory board, said she’s not worried about the school’s new program worsening the clinical rotation situation in Michigan. Health systems tend to support local schools; Eastern has its place in Washtenaw County and UDM has its place in Wayne, she said.

What she finds more frustrating is the lack of funding for PA programs despite the increasing demand for them. Medical student programs get federal funding support that PA programs do not, she said.

“There’s demand for PAs and a projected physician shortage, yet there’s not a real big push to educate us or train us. We could get out of the pipeline quicker,” Dereczyk said.

Tony Miller, chief policy officer at the Physician Assistant Education Association, a lobbying organization on Alexandria, Va., said it’s a tricky situation. Health systems clearly want the PAs, as evidenced by the excess of job offers students receive. But they have a hard time making way for students because of the extra costs and also because medical students and others are all vying for slots, and they’re all coming at the health systems in increasing numbers, too.

The problem is new enough that PAEA is still looking into what exactly it thinks should be done to give students a hand. There is federal graduate medical education money that funds resident medical students. Conceivably, similar funding could support PA students, but given the budgetary mood in Washington these days, that’s unlikely.

“There’s no love in Congress to pay for any kind of education,” Miller said.

Washington also does not like the idea of giving more money directly to health systems when they already receive Medicare funding, he said. “By my discussions with some officials at the federal government, that’s not encouraged,” Miller said.

Some schools pay stipends to health systems to defray training costs. The PAEA doesn’t see that as a sustainable option, though, because it feeds into tuition increases and then higher health care costs — the very thing hiring a PA is supposed to help prevent.

There is a pot of money at U.S. Department of Health and Human Services designated for PA training that, although beset by cutbacks, could be used in a way that avoids a direct handout to health systems or cause tuition spikes: Give it to students willing to travel to faraway rural areas that have shortages of health care professionals. Students who can’t find sites in metro Detroit could head to the Upper Peninsula to do their work, their travel and lodging costs defrayed by the financial support.

“It helps to get more physician assistants to rural, underserved areas,” Miller said.

Eastern Michigan University
Number of open slots each year: 20 (set to increase to 30 next year and 40 in 2016)
Usual number of applicants: 600
Year program was founded: 2014

Source: Schools and Accreditation Review Commission on Education for the Physician Assistant Inc.